For the past two weeks, only about 10 people have called the Columbiana County Health District to schedule appointments for a COVID-19 vaccine as all three Valley counties lag behind the statewide vaccination rate.
Apr 29, 2021 3:52 AM By: Jess Hardin 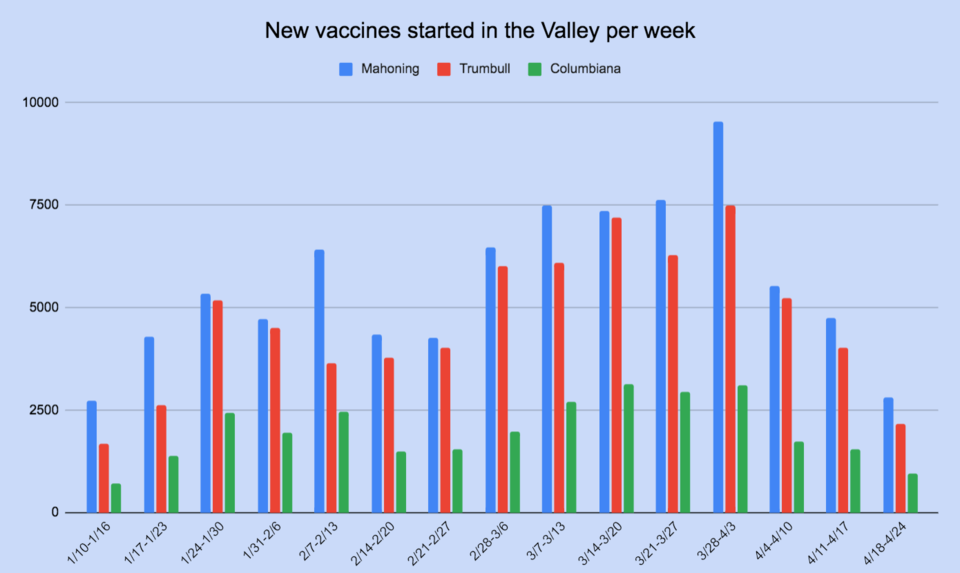 LISBON — Has vaccine hesitancy — or outright refusal — gripped the Valley?

For the past two weeks, only about 10 people have called the Columbiana County Health District to schedule appointments for a COVID-19 vaccine.

“We started seeing a reduction in interest in the beginning of March, and at the end of March, we saw a steep reduction,” said Laura Fauss, the district's public information officer.

The district has asked the state to stop sending new batches of vaccines, since it hasn’t used the reserve it already has stored.

A Mahoning Matters look at vaccination trends revealed that last week, Valley health officials administered fewer doses of the COVID-19 vaccine than they did the week of Jan. 17, when supply was extremely scarce.

Only about a third of Valley residents have started to receive their vaccines, and all three Valley counties lag behind the statewide vaccination rate.

About 39.5 percent of Ohioans have started to receive the vaccine.

Mahoning County lags slightly behind with about 39.3 percent of its population at least partially vaccinated. In Trumbull County, that rate is 37.4 percent, while in Columbiana County, that rate falls to only 31.9 percent.

The Columbiana County Health District’s vaccine supply expires in May and June, so if it’s unable to generate interest in the county, the district will have to transfer its reserves to be used elsewhere.

Fauss wants to conduct a survey to gauge residents’ hesitancy to get vaccinated.

Three weeks ago, the Trumbull County Combined Health District reported low turnout at its vaccine clinics. The district had 2,000 vaccines to administer; less than half were used.

Still, Kris Wilster, the district’s director of environmental health, told Mahoning Matters Wednesday he is not aware of a decline in people coming to receive the vaccine from the health department.

He acknowledged: at some point, there will be a time where people will not want to receive the vaccine. Maybe it’s come.

“I don’t know if it’s just to the end of the people that want it,” he said.

The department has about 100 doses of the Johnson & Johnson vaccine that are for homebound residents. Wilster said if there are leftover doses, the department will reevaluate to reach another population that needs vaccinations.

Trumbull County Combined Health District plans to open a walk-in clinic at the Eastwood Mall in the next few weeks.

Wilster said the department will do the clinics when there is high foot traffic during the week or on weekends.

“We can set up a spot in the mall and anybody at the mall can just walk in and possibly get [a vaccine],” Wilster said.

In an email to Mahoning Matters, Mahoning County Health Commissioner Ryan Tecak said there are 700 doses of Morderna set aside for Friday’s clinic at the former Dillard’s store in the Southern Park Mall and “we currently have 150 people signed up through our scheduling system."

Statewide, vaccine enthusiasm has fallen off of a cliff.

During a Tuesday news briefing, Gov. Mike DeWine addressed vaccine hesitancy, explaining the first third of any big push is the easiest.

To encourage Ohioans to get vaccinated, the state has amplified the voices of people explaining their decision to get the shot. Last week, DeWine unveiled three new public service announcements which target vaccine-hesitant young people.

The state has also highlighted what getting vaccinated will allow Ohioans to do.

For example, DeWine announced Tuesday that fully vaccinated Ohioans will no longer be required to quarantine after being exposed to someone with COVID-19.

During the fall, student athletes had to miss big games as a result of quarantine requirements, DeWine said.

“Vaccination is our key to putting this behind us,” said ODH Chief Medical Officer Dr. Bruce Vanderhoff.

Unpredictable and uneven demand for vaccines increases the likelihood that providers will have leftover doses at the end of the day.

In light of decreased statewide demand, the Ohio Department of Health issued guidance on Apr. 24 on minimizing COVID-19 vaccine wastage.

“Administration strategies such as walk-ins, vaccination of homebound individuals, or smaller on-site clinics may present an increased risk of vaccine wastage,” the guidance reads.

To mitigate the risk, ODH recommends providers do their best to confirm vaccine recipients prior to clinics and map their routes when bringing vaccines to homebound folks.

Providers are required to report instances where more than 20 doses are at risk of being wasted; in some instances, vaccines can be transferred to other providers though, “movement of vaccine is not a recommended practice,” ODH wrote.

In exploring vaccine waste in mid-March, the Associated Press reported ODH resisted using the term “wasted” when referring to such doses. Instead, ODH prefers to call them “unusable” vaccines.

On March 29, Cleveland.com reported Ohio providers discarded 4,214 “unusable” doses. As vaccine enthusiasm has tapered off in the last month, that number has likely increased, though ODH did not respond to a request for comment.