“In order for us to have that culture for people that want to live here and want to raise their families and grow here, we have to have activity — activity is so crucial," said YSU President Jim Tressel.
Jul 17, 2021 5:59 AM By: Justin Dennis 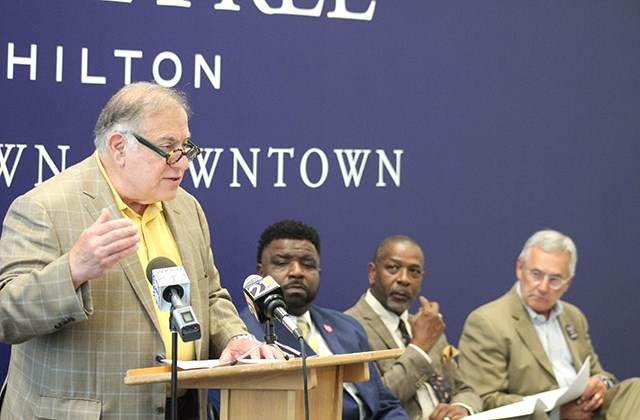 YOUNGSTOWN — A newly formed alliance of local arts and culture organizations looks to raise up the region’s cultural profile and competitiveness, and attract new audiences.

That coalition, dubbed The Cultural Alliance, was unveiled Friday during a media conference at the Covelli Centre in downtown Youngstown.

“The Eastern Ohio and Western Pennsylvania regions boast a proud history of a strong and vibrant arts and culture environment,” Dr. Chester Amedia Jr., Alliance president, is quoted in a news release. “The Alliance seeks to build upon that history, bringing together all parts of the arts and culture community to further amplify the important role that diverse arts and cultural activities play in the continued vibrancy of our region.”

The Alliance intends to act as the face of the Valley arts and culture scene, coordinating events to keep calendars from conflicting — they don’t want people to have to choose between one major event or another — backing competitive grants for Valley arts initiatives or helping smaller venues with administration, Amedia told Mahoning Matters.

Say a local symphony wants to put on an “Evening with Paganini” (the famed Italian violinist). The Alliance could help coordinate special Italian-themed menus at local restaurants, or work with another local stage to produce “Romeo and Juliet,” which is set in Verona, Italy, Amedia said.

The Alliance may also act as a conduit for grant fundraising efforts. Competitive grants are often “not helpful” for smaller arts and culture groups, he said. Acting and speaking through a coalition gives them a bigger profile, he said.

“There are things we wanted to get involved with but we couldn’t apply for it because we weren’t large enough or we didn’t have enough credibility, so this is going to try to muster this size and this strength,” Amedia said.

The Alliance could also centralize administration like offices or ticket booths for smaller venues struggling to do it on their own — “to make it more efficient without taking away their identity. And that’s important,” Amedia said.

Among the Alliance’s goals:

Its other officers include: Vice President Chuck George, chief executive of Hapco and vice chair of the YSU Board of Trustees; Secretary Bonnie Burdman, Ballet Western Reserve board member; and Treasurer Ken Bigley, vice president of JAC Management Group.

“Just given the rich cultural and art history of the Valley, it’s something we knew that needs to be preserved,” said Bigley. “A lot of these organizations have withstood the test of time — population decrease, societal changes and everything else — and they’re still here and still a cornerstone of everything the Valley is.”

Youngstown State President Jim Tressel said though one of the university’s cybersecurity specialists recently accepted another job hours away and for more pay, the work is remote, and the man chose to remain in the Valley because “this is the culture he wanted to be a part of,” he said.

“In order for us to have that culture for people that want to live here and want to raise their families and grow here, we have to have activity — activity is so crucial.”

Youngstown Mayor Jamael Tito Brown, a high school drama student himself, noted his national mayoral coalition has a council on the arts. He said he wants Youngstown to remain competitive and work together to build.

“We’re going to have one voice, one ask. … We want people to be exposed to who we are,” he said. “Exposure is the No. 1 thing for our children to advance.”