Newly inaugurated President Joe Biden called for national unity Wednesday after he and Vice President Kamala Harris took the oath of office. “It’s just a very emotional day to be in this place of transition and to be in elected office to show that we are here and we are committed to this community," Youngstown Councilwoman Samantha Turner said.
Jan 21, 2021 3:52 AM By: Mahoning Matters staff 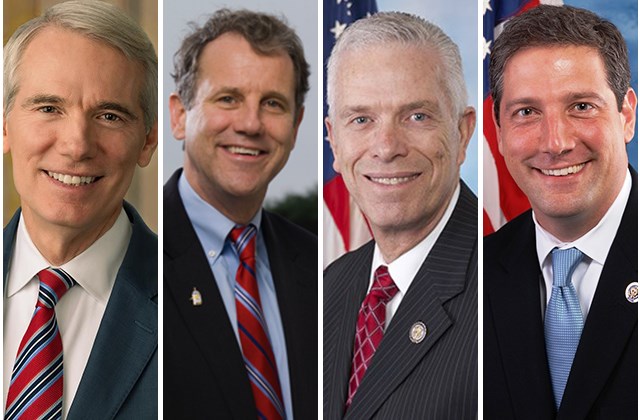 Mahoning Valley congressmen and state and local leaders on Wednesday sounded off on the new presidential administration:

“At such a difficult time in our nation’s history, I have full confidence President Biden will meet this moment and set a clear pathway forward to defeat the coronavirus, restore our economy, and regain faith around the world in the American system of government. ...

“With today’s inauguration, we look forward with clear eyes about the important work ahead. But we may also look forward with hope in our hearts that our best days as a country are still to come. The United States can achieve anything when we put aside our differences and work together for the common good. It is time for our nation to come together — both Democrats and Republicans — to tackle the immense and unprecedented challenges our nation faces. I look forward to this new chapter in America.”

“Today I attended the inauguration of President Joe Biden, as I did for Presidents Trump and Obama before him. It is my hope that the new administration will make a sincere effort to both reach out to and listen to rural Americans who feel increasingly economically and culturally isolated. America will only begin healing when political, academic, corporate and media elites understand that until groups that feel left behind are given the opportunity to fully participate in America’s 21st century economy, our nation will remain deeply and bitterly divided. No matter who is in the Oval Office, or which party controls the House or Senate, I will continue standing up for the men and women I serve in Eastern and Southeastern Ohio.”

“Today, I join Ohioans and the rest of the nation in celebrating the historic inauguration of President Joe Biden and Vice President Kamala Harris. American workers will finally have someone on their side in the White House, and millions of girls — especially Black and brown girls — all over the country are seeing that there is no limit to their dreams, and they belong in every room where decisions are made. I look forward to working with President Biden, Vice President Harris and my colleagues to rise to meet the challenges before us, bring our country together and continue our fight for the Dignity of Work.”

“I extend my congratulations to President and Dr. Biden as well as Vice-President Harris and Mr. Emhoff on today’s historic inauguration. I had the honor of attending, and I look forward to working with the new administration on areas where we agree in order to make a difference in the lives of Ohioans and all Americans. When we disagree I will do so respectfully. Public service is a noble calling and anyone who serves deserves the respect of the American people, regardless of political affiliation.”

“Exactly two weeks ago, terrorists stormed the Capitol and attempted to undermine the will of the American people as expressed through their votes in a free, fair and lawful election. Today, American democracy prevailed when Joe Biden was sworn in as our nation’s 46th president and Kamala Harris made history as the first woman and Black woman of South Asian descent to become vice president. During his address, President Biden laid out a vision to heal our nation, contain the COVID-19 pandemic and build our economy back better. It’s now time for us to get things done on behalf of working families.”

“I commend President Biden for his call for national unity, and his assurance to those who did not support him that he will nevertheless be president for all Americans. I urge the president to follow through on this commitment by working with members of Congress from both sides of the aisle to pursue policies that will lead to peace and prosperity for all Americans. I am praying for President Biden and his success in leading our country forward.”

"After a peaceful transition of power, Joe Biden is the 46th President of the United States. I promise to work with him where we agree, and to responsibly oppose him where we do not. One way we can work together to unite our country is to build on the Trump administration's successful conservative policies that led to unprecedented economic growth for American workers, families and small businesses before the pandemic.

"We know what works to build a stronger, safer and more prosperous nation for all Americans, so let's stick with it to overcome our present challenges. Calls for unity and healing sound nice, but they must be backed by action. It is my hope that the Biden Administration will respect the lessons of the recent past by choosing common sense over radicalism that will only divide us further."

“Today marks the dawn of a new era of hope and opportunity in the nation we love. It is an era personified by Vice President Harris, whose historic election to the second-highest office in the land brings us one step closer to making Dr. Martin Luther King, Jr.’s inspirational dream a reality for us all.

“In the hours, days and weeks ahead, President Biden will take bold steps to stem the tide of the COVID-19 pandemic, reinvigorate our economy, assist families, businesses and state and local governments devastated by the pandemic, create hundreds of thousands of jobs by investing billions to rebuild our nation’s crumbling infrastructure, protect our environment and defend human, civil, and women’s rights.

“I promise I will do everything in my power to support him, and I will work tirelessly to ensure the Valley and the state of Ohio take advantage of the opportunities to grow and prosper his policies will provide.”

“The day was indeed Inauguration Day, and I tell you my heart was kind of full of fear; wasn’t sure what’s going to happen. Everything was so well. I’m very pleased that we have a new president and vice president and that we now have the whole process of Congress in the Democratic Party’s hands. I have hope for the future. I don’t expect a miracle worker. There’s no magic wand or anything like that but indeed I do have much hope for the future. I hope that we can eventually and not instantly set aside some of our differences and find a place where we can work together for the betterment of our community.”

“It’s just a very emotional day to be in this place of transition and to be in elected office to show that we are here and we are committed to this community. I just saw President Biden just start signing executive orders and getting to work right now even though there is so much going on around him. We have to get to work and move this city forward so I am very hopeful for what’s to come, but even more hopeful for what is to come out of this body and out of our city.”