The state wants both rounds of coronavirus vaccine shots done by the end of spring. It may be an unrealistic goal, local officials said, but new private partnerships will be a big help in getting kids back to school by March 1.
Jan 20, 2021 3:52 AM By: Justin Dennis 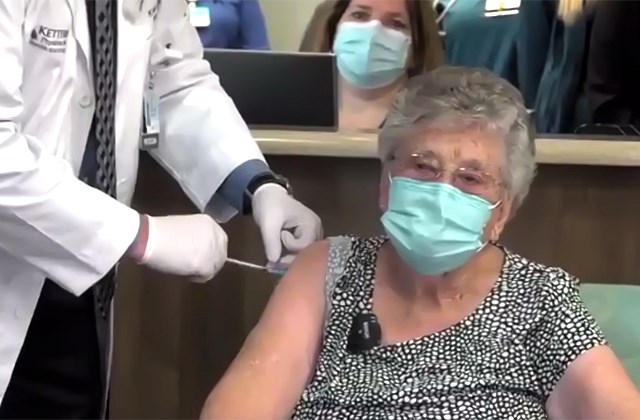 A 101-year-old woman was shown being vaccinated at Dayton's Kettering Health Network during a Tuesday, Jan. 19, 2021 briefing on Ohio's coronavirus response.

CEDARVILLE — Local school districts looking to vaccinate adult staff against coronavirus are getting backup from vaccinating retailers like Giant Eagle and Marc’s to meet Gov. Mike DeWine’s goal of having kids back in the classroom by March 1.

Though it seems an “unrealistic” goal, the new private partnerships may make all the difference, educators said.

During a Tuesday briefing on the state’s coronavirus response, DeWine announced nearly all of Ohio’s K-12 school districts have resumed in-person learning or are committed to resuming, on an at least part-time basis, by March 1.

Adult faculty and staff in districts that have pledged to return to the classroom will become eligible for the vaccine on Feb. 1.

Officials expect the first shots to be done by the end of the month, and booster shots completed by the end of spring, Traci Hostetler, Mahoning County Educational Service Center superintendent, learned during a Tuesday evening conference call with DeWine’s administration.

Ohio’s 52 educational service centers have been charged with helping those returning districts finalize vaccination plans and coordinating with the governor’s office to find vaccinating partners for those districts. School districts must now choose whether to partner with their local health agency or a private partner on vaccination clinics.

“Two weeks ago, they were concerned the health department was their only partner,” Hostetler said. “I think it’s refreshing to hear there are some other providers that are gonna be able to help get this done.”

Saxton sent out registration forms to district employees two weeks ago; 451 employees — about 70 percent of staff — have signed up.

The district is now in the process of working with MCPH to plan on-site vaccination clinics for early February, and there’s a lot the district must take into consideration to pull it off.

For example, scheduling the clinic for a Friday would be ideal, so, if employees experience side effects, they won’t have to be at work the next day.

So far, the planning process has been smooth, thanks to the relationship MCPH has established with local school districts throughout the pandemic. Saxton said the department conducts a call with county school leadership every week.

“I don’t think we’d be as far along knowledge-wise about COVID and contact tracing and quarantine if it wasn’t for those calls. They’ve been tremendous, so I have complete faith that will continue as we move into the vaccine stage,” he said.

A message released Tuesday by the Ohio Department of Education suggested school workers won't be eligible for the Feb. 1 “early” vaccinations unless their district has committed to DeWine’s March 1 goal.

Last week, Youngstown City Schools was the only Mahoning County school district that hadn’t yet planned to return to in-person learning by March 1.

Superintendent Joseph Meranto said the district was waiting until it could do it safely.

The district continues to work with the city health department on its plan for vaccine distribution in February, she said.

A message released Tuesday by the Ohio Department of Education, however, suggests school workers won’t be eligible for the Feb. 1 “early” vaccinations unless their district has committed to DeWine’s March 1 goal.

The Ohio Federation of Teachers worries the March 1 goal will pressure districts into opening before they’re ready and create unrealistic expectations for students and their parents.

Officials should consider other factors like districts’ ability to follow pandemic precautions like masks and social distancing; the rate of community spread in the district; and the efficacy of coronavirus testing and vaccination programs, union President Melissa Cropper wrote in a Saturday blog post.

“Overall, we believe that reopening schools by March 1 is a strong goal that we should all work toward, but that it does not make sense to make that a precondition for distributing the vaccine. We want to return to our schools as soon as possible, but only when it is safe to do so,” she wrote.

“The bottom line is that withholding the vaccine should not be used as a threat to get schools to open,” Cropper continued. “We believe that the governor should be working with educators to determine safe opening conditions and then trusting educators to make the decision about when those conditions have been met.”

All but two Columbiana County school districts have already returned to some form of in-person learning, and those two are set to return later this month, said Anna Marie Vaughn, the county’s ESC superintendent.

The Columbiana ESC had already been gathering background data on the number of workers opting for vaccinations at county school districts in preparation for school vaccinations, she said. After Tuesday’s conference call with the state, she remains skeptical about the speed of vaccine’s rollout in schools.

“I would love to say Feb. 1, but it doesn’t feel that’s realistic, according to supply,” Vaughn said.

“From what we’re hearing, everybody’s [eager] to get the vaccine,” she added. “I think it’ll work out. It’s just a logistical problem right now.”

Hostetler said until the vaccines physically arrive in the state — most are still being held for distribution at the federal level — she feels much of the state’s plan remains hypothetical.

“The good news is at least we’re talking about it. At least we’re to the point where there’s something available; we’re working to plan,” she said. “I hope it’s inevitable.”

• This week, Ohioans aged 80 and older became eligible for the coronavirus vaccine. Next week, eligibility expands to include those aged 75 and older as well as younger adults with severe congenital or early-onset health disorders.

• Gov. Mike DeWine said pharmacies partnering with Ohio to administer the vaccine in the state's nursing homes were expected to have delivered the first round of shots to every facility in the state by the end of the day Tuesday. More than 60 percent of the state’s COVID-19 deaths have been reported in nursing homes, the governor said.

• State Rep. Al Cutrona of Canfield, R-59th, encouraged businesses across Mahoning County to apply for assistance through the Bar and Restaurant Assistance Fund. The deadline for applications is Jan. 31 and Mahoning County has more than 100 businesses that have not yet applied for the grant program, he said.

• According to the Pennsylvania Department of Health on Tuesday, there were 777,186 COVID-19 cases in the state which have led to 19,467 deaths. The state said the recovery rate is 77 percent. There have been 7,059 confirmed or suspected cases in Mercer County and 196 deaths; 5,128 cases in Lawrence County and 150 deaths. In Mercer County, 2,874 people have been vaccinated thus far; 1,833 in Lawrence County.