Authorities are asking for the public’s help in determining what happened to 40-year-old Bessie Ryan.
Feb 23, 2021 10:02 AM By: Mahoning Matters staff 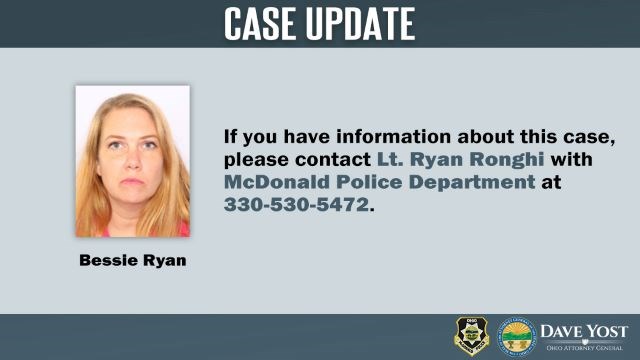 YOUNGSTOWN — Experts working for the Ohio Attorney General’s Office have identified a woman whose body was found in the Mahoning River last summer, and authorities are asking for the public’s help in determining what happened to her.

After the body was found in the river in July, the McDonald Police Department requested the assistance of the Bureau of Criminal Investigation.

BCI conducted forensic testing and, through DNA analysis, identified the woman as Bessie Ryan, 40. Ryan had last been seen in March and was reported as a missing person in Warren.

“BCI’s forensic work names the nameless — and the identification of a missing person may be the first step in solving a case,” Attorney General Dave Yost said in a news release. “On behalf of the many families searching for hope, I’m grateful for the work that BCI does to reunite families with their missing loved ones.”

Anyone with information concerning Ryan’s disappearance is urged to contact Lt. Ryan Ronghi with the McDonald Police Department at 330-530-5472 or the Trumbull County 911 Center at 330-675-2730.