Vijay Iyer to launch next Pipino series of virtual performances

Also in the series will be presentations by Du Yin, Anthony Roth Costanzo and Tyshawn Sorey.
Jan 25, 2021 2:30 PM By: Mahoning Matters staff 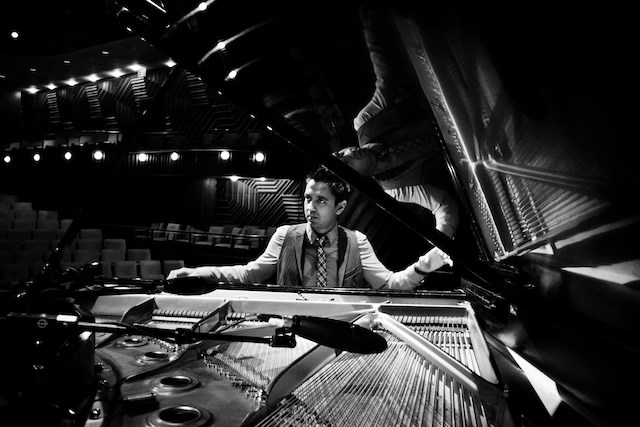 Presented by YSU's Cliffe College of Creative Arts, Iyer will offer a one-hour presentation including pre-recorded music, conversation and a question-and-answer session Wednesday (Jan. 27). The free performance begins at 7 p.m.

The series is available on the Cliffe College of Creative Arts' YouTube channel.

On Friday, Iyer will present a master class at 2 p.m. on Zoom that will be accessible here.

On April 9, ECM will release "UNEASY," Iyer’s new trio album, recorded in December 2019 with his friends and collaborators Linda May Han Oh on bass and Tyshawn Sorey on drums.

He holds a lifetime appointment as the Franklin D. and Florence Rosenblatt Professor of the Arts at Harvard University, with a joint affiliation with the Department of Music and the Department of African and African American Studies.

“We’re thrilled to continue the Pipino Performing Arts Series this semester," Phyllis M. Paul, dean of the Cliffe College of Creative Arts, said in a news release. "Although the events will be presented virtually, we couldn’t be happier with the exceptional quality of the artists who will make up the spring season.

"YSU believes that the arts are vital to the university and our community and is committed to supporting our many artistic endeavors."

The series will spotlight three other guest artists.

On Feb. 17, Pulitzer Prize-winner Du Yun will host a master class at 4 p.m. and a presentation at 7 p.m.

Yun is a Chinese-born composer, multi-instrumentalist, vocalist and performance artist. She won the 2017 Pulitzer Prize for Music for her opera "Angel's Bone," with libretto by Royce Vavrek. She was a 2018 Guggenheim Fellow.

On March 3, countertenor Anthony Roth Costanzo, a headlining Metropolitan Opera soloist and Musical America’s 2019 Vocalist of the Year, will offer a presentation at 7 p.m. He also will give a master class on March 4 at 4 p.m.

Costanzo began performing professionally at age 11 and has since appeared in opera, concert, recital, film and on Broadway. His debut album, "ARC," was nominated for a 2019 Grammy Award.

On April 14, multi-instrumentalist and composer Tyshawn Sorey, a MacArthur Foundation Genius Fellow, will perform at 7 p.m. and present a master class on April 16 at noon.

Sorey has performed nationally and internationally with his own ensembles and numerous artists.

He has composed works for the Los Angeles Philharmonic, the International Contemporary Ensemble, tenor Lawrence Brownlee with Opera Philadelphia in partnership with Carnegie Hall, as well as for countless collaborative performers.

He was a 2015 recipient of the Doris Duke Impact Award.