“The country’s already practically on fire. Do we really want to light a fuse even more?" asked YSU Professor Paul Sracic as the country grapples with what to do with President Donald Trump during his final days.
Jan 8, 2021 3:52 AM By: Jess Hardin 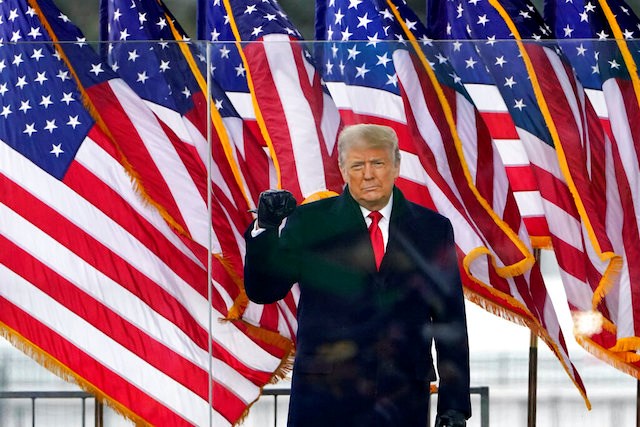 Democrats are calling for President Donald Trump to be removed from office after he incited a riotous mob. Republicans are condemning the violence, and tiptoeing around condemning the president. Right-wing conspiracy theorists have already begun peddling excuses that blame left-wing activists for Wednesday's violence.

From removing President Trump from office to prosecuting those who participated in Wednesday's riots, politicians are debating what to do next.

“D.C. is already a tinderbox,” he said regarding the prospect of removing Trump from office. “The country’s already practically on fire. Do we really want to light a fuse even more?"

"This is the quickest way to protect our domestic and national security," Casey said in a statement. Removal would "prevent him from doing more damage between now and Inauguration Day," Brown wrote. President-Elect Joe Biden and Vice President-Elect Kamala Harris will take office Jan. 20.

In order to invoke the 25th Amendment, Pence needs the support of the majority of Trump's cabinet; but several members have already resigned, including Education Secretary Betsy DeVos and Transportation Secretary Elaine Chao.

If Pence refuses to move forward with removal — and some national news outlets reported Thursday night that Pence was not inclined to invoke the 25th Amendment — some members of Congress are calling for impeachment.

But, it would be extremely difficult to complete the impeachment process in the next 12 days, said Sracic. Invoking the 25th Amendment, however, is "really quick."

Beyond logistics, the political ramifications of either process would further stoke the fire of rioters, Sracic argued.

"It’s going to look like a coup to people who passionately support the president," he said.

Meanwhile, the conservative-leaning Wall Street Journal, in an editorial published Thursday night, called for Trump to resign, saying that is "the cleanest solution since it would immediately turn presidential duties over to Mr. Pence. And it would give Mr. Trump agency, a la Richard Nixon, over his own fate."

From a Zelienople, Pa. police officer to an adjunct professor at St. Vincent College, participants in Wednesday's events are being uncovered — thanks to their ill-advised social media posts — and they're facing consequences.

"This is all on social media," said Sracic. "These people created the evidence. It's going to be some of the easiest convictions you've ever seen."

In a now-deleted video on his Facebook page, former Pennsylvania State Rep. Rick Saccone posted from the grounds outside the Capitol with the caption: “We are storming the capitol. Our vanguard has broken thru the barricades. We will save this nation. Are u with me?”

An online petition called on his employer, St. Vincent College, to remove Saccone. The college opened an investigation, and Saccone resigned.

Meanwhile, the Metropolitan Police Department has collected images of rioters engaged in criminal activity like unlawful entry and receiving stolen property. MPD is offering rewards of up to $1,000 for information that leads to arrests or indictments.

"This is going to be very bad for people who I think didn't realize what they were getting into when they did it," said Sracic. "People are going to go to jail for this who I don't think expected to. This is going to just ratchet up some tensions. We're in for a rough ride."

In reflecting on the attempted coup Thursday, DeWine — who has bent over backward to avoid criticizing Trump — changed his tune, but only slightly.

Calling Wednesday "a dark day in the history of our republic," DeWine said Trump delivered an "incendiary" speech Wednesday morning to a group of supporters who gathered at the U.S. Capitol hours before the riots and "fanned the flames" of what officials have called an insurrection.

"It was shocking," Lt. Gov. Jon Husted chimed in. "It felt like something you'd see in some emerging third-world democracy, not America."

When asked to address critics who say he refused to condemn Trump, DeWine mentioned that Trump tweeted the governor should be primaried when he seeks re-election in 2022. But the Trump tweet was in response to DeWine acknowledging Biden's victory.

During a news briefing on Sept. 24, Gov. Mike DeWine was asked if he would condemn President Trump's refusal to commit to a peaceful transition of power.

He had responded: "I'm not going to condemn anything. I don't know what's in his heart and his mind."