Where GM's battery plant, dubbed Project Magellan, could be built

General Motors hasn't selected a site for its proposed battery cell plant, but regulatory filings appear to show where it's looking.
Dec 6, 2019 6:55 AM By: Mahoning Matters staff
Previous Next
1 / 1 The exterior of the Lordstown Motors Corp. headquarters along Hallock Young Road in Lordstown, shown here Dec. 5, is now bare after a sign depicting the Chevrolet Cruze line was removed last month, signifying the 53-year-old General Motors facility had been passed on to the electric vehicle startup. (Robert K. Yosay)
Expand
Previous Next

LORDSTOWN — General Motors, which is partnering with South Korea’s LG Chem to manufacture batteries for electric vehicles and create 1,100 jobs in the Mahoning Valley, has dubbed the proposed plan “Project Magellan” in a regulatory filing, apparently after the 16th century explorer who first circumnavigated the Earth.

GM announced Thursday the all-new facility would be built next year on a greenfield site somewhere in the Lordstown area, but didn't say exactly where it wants to build it.

State Sen. Sean O’Brien of Bazetta, D-32nd, said he believes the exact site hasn’t been chosen, but that GM is considering three locations in the Valley, two of which are in Lordstown and one that is several miles outside the town.

“No matter what, they are committed to doing this project in the Valley,” he told Mahoning Matters.

A wetlands permitting pre-application filed Nov. 6 by GM lists seven different locations as "other parcels considered." All are centered around Lordstown and one is right next door to GM’s former Lordstown Assembly Complex —  the new headquarters of electric truck-maker Lordstown Motors Corp. 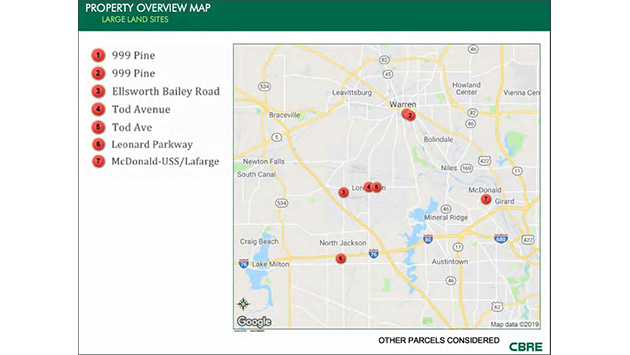 Shown here is a map submitted Nov. 6 by General Motors to the Ohio EPA in a wetlands permitting pre-application for a proposed battery cell production facility, showing "other parcels considered."

The filing specifically relates to one of those sites: a nearly 320-acre plot just across Ellsworth Bailey Road from the Lordstown Motors plant, at the intersection of the Ohio Turnpike.

Norfolk Southern-Pennsylvania Lines LLC owns about half that acreage, Trumbull County Auditor records show. That parcel, currently for sale at $30,000 an acre, is zoned for industrial use and designated as an Enterprise Zone as well as a Community Reinvestment Area, according to its economic development site listing on the JobsOhio website. That site could offer tax and infrastructure incentives or reduced regulations, and could be designated a Foreign Trade Zone in the future, which would ease tariffs for international trade.

The other half is owned by various other entities and includes 20 acres available for lease, according to JobsOhio.

The pre-application includes a diagram of how a facility might be built there — including where battery assembly, formation and electrode manufacturing and rail-loading could go — but focuses on its impact to the surrounding wetlands rather than features like the facility’s size. 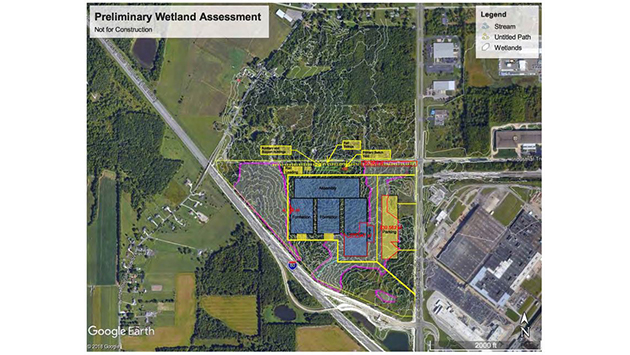 Shown here is a map submitted Nov. 6 by General Motors to the Ohio EPA, detailing how a proposed electric vehicle battery cell production facility would impact wetlands in the area.

The filing doesn’t detail specific locations for the other six proposed sites, but they appear to correlate with available economic development site listings on the JobsOhio website:

“We had an idea this was out there," O’Brien said. “I think they’re doing their due diligence now. They want to get shovels in the ground in April."

The proposed plant would join what appears to be the beginnings of a hub for electric vehicle technology and manufacturing in the Valley. Lordstown Motors Corp. announced plans just last month to hire about 400 workers to manufucture an electric truck at the former GM Lordstown plant that employed thousands of workers until it was shuttered last year.

GM CEO Mary Barra said General Motors does not have a formal relationship with Lordstown Motors Corp. or Workhorse — the Cincinnati-based electric vehicle maker formerly headed by Lordstown Motors CEO Steve Burns — but "that's not to say there couldn't be something in the future."

Representatives from Lordstown Motors Corp. could not be reached for comment Thursday. 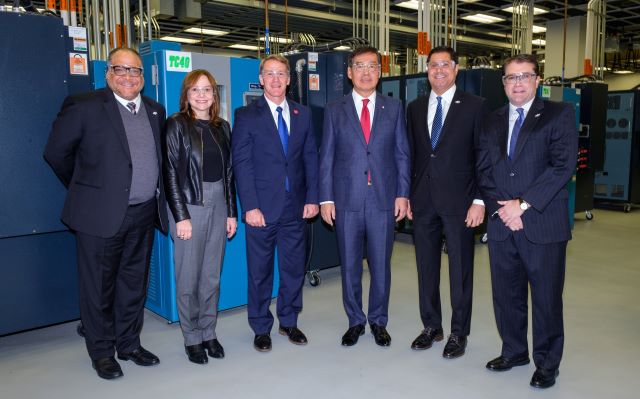 During a Thursday conference call, U.S. Rep. Tim Ryan of Howland, D-13th, was among the lawmakers who responded enthusiasticaly to GM's news, noting the rise of other local players in the burgeoning electric vehicle field, such as Brite Energy Innovators, a Warren-area incubator for energy technology.

“I think this is the greatest opportunity we’ve had in our community in decades. Millions and millions of electric vehicles are going to be made somewhere in the world in the next 10 years,” Ryan said. “For GM to put this plant somewhere in our community I think is huge because of the growth potential.”

O’Brien said he sees other synergies in the region. The local legislative delegation has discussed sourcing Lordstown Motors’ battery system designs from Youngstown State University students — “we can do the same with General Motors or LG” — or offering skill-training for electric vehicle manufacturing through Eastern Gateway Community College.

“Autoworkers in the Valley are among the best in the world at what they do, and any investment in Ohio workers is a smart investment,” he said in a statement. “At the same time, we know that GM could have made a better investment in the Valley by bringing a new vehicle to Lordstown — and saving the jobs of its 4,500 workers at the plant.”

Tim O’Hara, president of Lordstown’s United Automobile Workers Local 1112, said that was his reaction, too.

"Obviously for the Valley, it's good news economically that there will be some [jobs] being created at some point in the future,” he said.

When asked Thursday if the plant employees would be UAW members, Barra said "that's up to the workforce."

It's not yet clear if former Lordstown workers, most of whom were offered jobs at other plants, would be able to continue GM employment at the plant. Barra said that since the battery plant is a new entity, that "will have to be worked through."

Workers who took buyouts from GM have asked O'Hara if they would be able to work at the new plant.

"It would make sense for them to hire our people that worked at GM," he said. "I always considered our members the best auto workers in the world. … I'd hope this venture would be accommodating to a union.”

O’Hara said workers at GM’s battery plant in Michigan get paid somewhere around $15 to $17 an hour — “substantially less” than top-scale at the former GM Lordstown plant, and likely less than they’re making at their new plants.

"As much as they probably want to come back home, they're not gonna quit a $32-an-hour job to come back ... I don't see any of them coming back to the Valley to work at this place. For the people that stayed behind, it's another opportunity to get back into the auto industry if that's what they decide they want to do," he said.

Ryan told reporters declining wages have been a concern “for decades” but he hasn’t heard any assurances from GM.

“We’re going to do everything we can to make sure those wages are living wages, that people have good benefits,” he said. “Whether it’s union or not, the hope is the wages are significant enough to rebuild the middle class.”