The 9-foot replica was created with AMClad, a proprietary, 3D printed material developed by Freshmade 3D.
Oct 29, 2019 8:03 AM By: Mahoning Matters staff 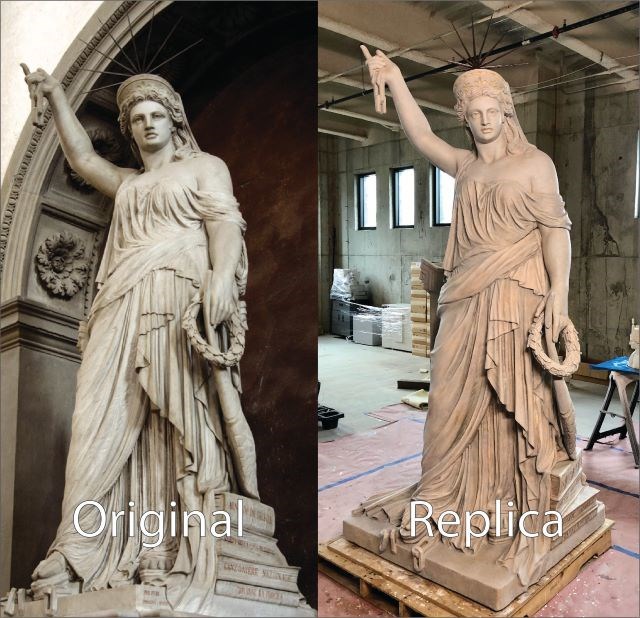 At left is Pio Fedi’s Liberty of Poetry statue. At right is a replica created by Freshmade 3D, a Youngstown Business Incubator portfolio company, along with Kent State University. (Contributed photo)

The original is said to have served as the inspiration for the Statue of Liberty. The 9-foot replica was created with AMClad, a proprietary, 3D printed material developed by Freshmade 3D. The rays on the top of the head were cast in a 3D printed sand mold printed by Humtown Products in Leetonia.

KSU became aware of Freshmade 3D after learning about its first AMClad project — two life-size bobbleheads of the presidential candidates for the 2016 election, commissioned by the Youngstown/Warren Regional Chamber.

“What excites me most about the 3D printing technology used in this project, is that it changes your perception on what 3D printing can do,” Josh Talbott, team leader of the Division of Information Technology, said in a news release. "The finished product turned out beyond our wildest imagination.”

The replica statue is featured at an exhibit at the Ellis Island National Museum of Immigration in New York City. The exhibit, titled “Sisters in Liberty: From Florence, Italy to New York New York”, is a collaboration between Kent State University and the Opera di Santa Croce, a nonprofit organization in charge of the Franciscan Cathedral Santa Croce that serves as the resting place of Michelangelo, Galileo and Machiavelli.

Kent State provided 3D scanning data taken from the original statue to begin the design process. Freshmade 3D then divided the data into multiple sections and designed the supporting structures. Artists from KSU then applied a painted faux finish resembling the original marble.

To learn more about The Liberty of Poetry replica, visit www.listeningtoliberty.com.