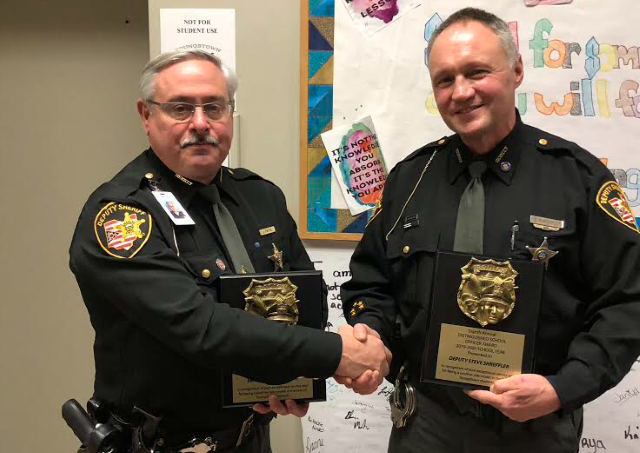 Each year, William Morvay, the district’s chief of security, asks school administrators and staff to nominate officers who are positive role models, counselors and educators, provide exceptional service during the school year and have made a difference in the academic progress of the school in addition to their more traditional police officer duties, according to a news release.

“Over the last few years, I have been so impressed with Officer Payne’s compassion for students, his ability to discern whether to give a student immediate counsel over inappropriate behavior or to take a step back and allow a student to cool off before engaging,” Robinson wrote in her nomination of Payne.

She relayed a story about how Payne was concerned for a student who hadn’t been in school for an extended time.

“He did a wellness check to make sure the student was OK and to encourage him to return to school,” Robinson wrote.

“It is my belief that Officer Payne’s interest and concern is a major factor to this student successfully completing high school,” she said.

In his nomination of Shreffler, Bermann, who now serves as assistant principal at Williamson Elementary, described the officer as not only a police officer but also a “role model, mentor, public relations liaison, friend and confidant, as well as MacGyver in a sheriff’s uniform.”

“On a daily basis he greets more than 120 people and welcomes them into the building while building the relationships that have been so important to the success of the building,” Bermann wrote. “You will see him greet parents and families by name and check in to make sure they are doing well.”

“Steve provides students with a different look at what police officers should look and act like,” the assistant principal wrote.

And then there’s the MacGyver aspect of Shreffler’s service.

He developed an aquaponics filtration system for the school’s aquarium and is growing lettuce and basil with the help of the school’s science club, Bermann said. Shreffler also designed a modified wheelchair base to allow a student to move his wheelchair and help with the school’s recycling program without assistance from another person.