Gov. Mike DeWine late last year promised to offer the vaccine to school faculty and staff as long as their districts pledged to return to some form of in-person instruction — including a hybrid model with some days in-person and some days remote — by March 1.
Feb 17, 2021 4:52 AM By: Justin Dennis 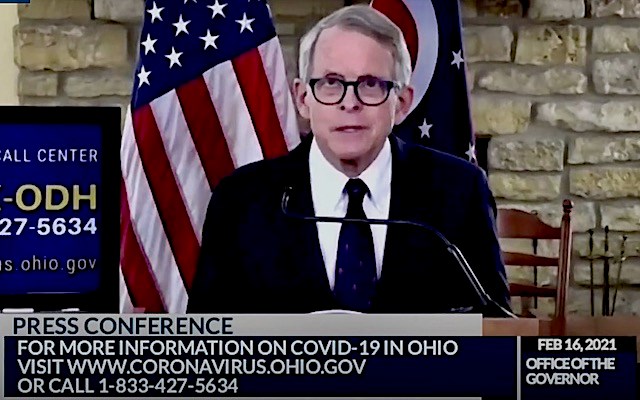 YOUNGSTOWN — Youngstown City Schools later this week is expected to announce its plan to reopen this year for in-person instruction — but a spokesperson couldn’t say whether it will be by the state’s March 1 goal.

The district has yet to release its plan for students to return to the classroom and is one of about 30 school districts in Ohio whose students are still learning remotely, despite pledging to return by March 1 in order to receive prioritized eligibility for the coronavirus vaccine.

Gov. Mike DeWine during a Tuesday briefing on the state’s coronavirus response again urged those school districts, including Youngstown, Cleveland and Akron, to hold up their end of the bargain.

DeWine late last year promised to offer the vaccine to school faculty and staff as long as their districts pledged to return to some form of in-person instruction — including a hybrid model with some days in-person and some days remote — by March 1.

During a special briefing Friday evening, DeWine announced some districts that pledged to return by March 1 appear to be going back on that promise.

Youngstown City Schools instruction has been entirely remote since the state shut down K-12 schools in March.

“There will be some kind of reopening this year but I can’t tell you any more details than that,” she said.

The U.S. Centers for Disease Control and Prevention on Friday released a new set of guidelines for safely reopening schools:

Schools CEO Justin Jennings during his first CEO update of the year last week said the district is focusing on administering vaccinations and continuing to “keep people healthy.”

As of earlier this week, the district had received 1,100 doses of the coronavirus vaccine and administered at least 800 first shots to faculty and staff, the district’s nursing supervisor said last week. The district employs about 1,350 people.

DeWine during the Friday briefing said the state would still administer the necessary second vaccine shot to those who’ve already had the first, regardless of whether their district has returned to the classroom by March 1, but said other noncompliant districts may see their incoming vaccine allocations diverted elsewhere.

Transportation remains a significant hurdle for the district to return, district officials have said. New federal guidelines for reopening schools urge administrators to keep at least some distance between students while they’re on the bus. But bus space is already at a premium for Youngstown City Schools, which also buses students of area parochial and charter schools, Dick said.

Jennings has said he intends to use incoming federal pandemic relief funding toward more vehicles, but, as Dick said Tuesday, the ordering process “takes months if not a year to get one."

“It’s certainly a large undertaking,” Dick said. “We’re doing our best to meet the goal. … Mr. Jennings  has said from the beginning we’ve got to worry about safety. It’s a balancing act.”

• The number of state COVID-19 deaths has continued to spike after last week’s discovery of as many as 4,000 unreported COVID-19 deaths in Ohio. The Ohio Department of Health has reconciled an internal death certificate database with a federal database and added those deaths to the state’s tally.

• Inclement weather that’s paralyzed much of the country has also delayed some of the state’s coronavirus vaccine shipments for one or two days, Gov. Mike DeWine said Tuesday. While many vaccine providers continued with scheduled vaccination appointments Tuesday, some canceled them and contacted affected patients. Ohioans who haven’t heard from their provider are urged to contact them or visit their website.

• The state is now working with vaccine providers to integrate their vaccination scheduling systems into the state’s centralized system, expected to be a one-stop shop for coronavirus vaccination appointments in the state. Ohioans will be able to find a vaccine provider and schedule an appointment from the online portal, once it goes live on coronavirus.ohio.gov. Local area agencies on aging like Direction Home of Eastern Ohio are expected to help Ohioans without internet access schedule their appointments.

• A series of town hall-style online forums offering coronavirus vaccine information targeted toward minority and rural Ohioans and featuring medical professionals and community leaders are scheduled to begin next week on coronavirus.ohio.gov/townhall:

• Some Ohio lawmakers want students to concentrate on learning and not testing as they return to the classroom. House Bill 67 would remove the requirement for schools to administer state-mandated tests this year. The bill also would require the Ohio Department of Education to ask for a waiver for all federally mandated tests, which it sought and received for the past school year.