While a union leader cited safety issues created by Fire Chief Barry Finley's decisions as a reason for a no-confidence vote, tales about Finley’s past workplace conduct have also surfaced.
0
Dec 4, 2019 5:56 AM By: Jess Hardin 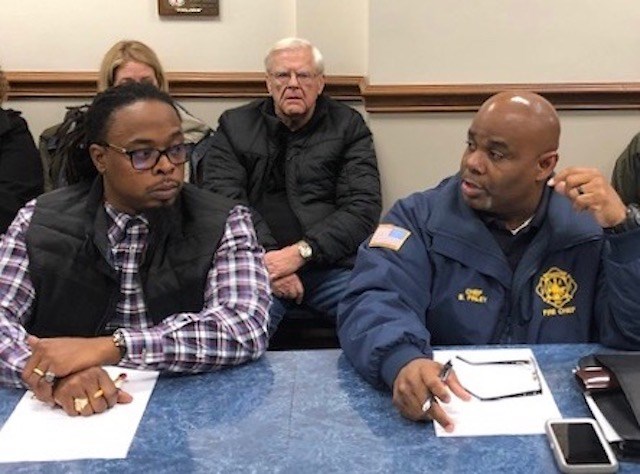 “Honestly, I think we’ve given enough, and I’m not willing to give any more,” Finley said at the Aug. 5 meeting. Since, he has cut three battalion chiefs and plans to close a fire station.

That “about-face” was the last straw for union president Charlie Smith, who has evolved to become a vocal critic of the fire chief.

"It's gonna be a huge number," Smith said.

While Smith cited safety issues created by Finley’s decisions as a reason for the vote, tales about Finley’s past workplace conduct have also surfaced.

Smith said that these decisions have created "the feeling that what we do underneath this guy isn't important. The whole sense of dignity for this job is taken away by that.”

From Mayor Jamael Tito Brown’s perspective, the vote stems from personal issues in the department.

Smith was one of three candidates in the running to become fire chief, said Brown. Since hiring Finley, “the issues have been coming up,” he said.

"That's not the case at all," said Smith. "My thought process was that he picked who he picked, and that was his choice. I chose to be union president to represent the body and to work with the fire chief to implement what the fire chief wanted with EMS. And that never came about."

Cuts leave some seeking a plan

Since becoming chief in 2018, Finley’s department has often looked like Ground Zero in terms of the city’s financial distress. He closed a fire truck, demoted nine, closed a fire station and reduced the number of battalion chiefs from six to three. The department also utilizes radios that don't work properly, Smith said.

Smith is frustrated that cuts always seem to target the fire department.

"Back in 2001 when they did the income tax hike for the safety forces, they were cutting across the board, everybody, all departments. That felt like there was really something going on. Now it's like taking candy from a baby, because there's no fight there," Smith said.

But, in April 2018, a financial review of the city projected a $16 million deficit by 2023 if the city didn't make changes. That was before the closures of Northside Hospital, GM Lordstown and The Vindicator promised further income tax losses for the city. Some sources pegged that number at $880,000 per year.

While many see the cuts as necessary for the financial health of the city, some critique Finley's approach.

“The last year and a half has been chaotic and confusing,” in terms of changes at the fire department, said McNally. “I really cannot support any changes until we see a comprehensive plan from the administration."

Brown said he believes that Finley does have a plan. Outrage about proposed closures “overshadowed what Chief Finley wanted to talk about,” said Brown.

Brown said that other cuts will accompany cuts to the fire department. He added that the city is in the process of fixing the faulty radios.

News of the decision to close Fire Station No. 7 on the city’s North Side mobilized the community in opposition to the move.

The station, which is the busiest in the city, serves the North Side and Youngstown State University. City officials contend that the closure will save money and that modern fire trucks are too heavy for the building, which was built in 1903.

The Wick Park Neighborhood Association organized a rally to protest the decision Nov. 2 and collected signatures for a petition. At Youngstown City Council's Nov. 13 meeting, eight people addressed council to oppose the decision, requesting that the city keep the station open until there is a plan to replace it.

Finley opted to delay the closure from Dec. 1 to Dec. 16 to provide more time for firefighters to transition.

State Rep. Michele Lepore-Hagan, D-Youngstown, who represents the North Side, met with the mayor Monday to discuss delaying the closure for a year and trying to get state funding for a replacement.

"The reasons [city officials] are giving don't seem to hold up," said Lepore-Hagan. When asked why the station is important, she added: "They keep building more and more student housing right around [the station], and there's a high school sitting right next to it."

"I'm trying to convince [Brown] to move slowly and let me help them through my office," Lepore-Hagan said.

When asked about the effort, Brown told Mahoning Matters, “No, we are moving forward.”

It's no secret to Brown or any media covering the fire department in recent weeks that Finley’s personnel file has become the subject of the union's consternation.

"Morale is gone to say the least," Smith said. He cites the atmosphere in the department created by Finley as contributing to the no-confidence vote.

Mahoning Matters obtained a copy of the file at city hall. Amid some positive letters and accommodations are also documents that indicate workplace issues in the past decade.

Regarding the 2013 incident with with the captain, former fire chief John O'Neill wrote in a memo to Finley: “Your actions were an outrageous display [of] insubordination. In fact, the most indignant display that I have witnessed as long as I have been the Fire Chief."

For Brown, the issues are in the past.

“It's hard for me to Monday morning quarterback those issues,” Brown said. “It’s not fair for me to take clips. I did get a debriefing on it, but I didn’t see any interviews from witnesses. I didn't see any evidence. I just saw one side of a report.”

"He's not a leader," Smith contends. A leader doesn't curse or make comments that appear to be physical threats, he said.

Brown disagrees, calling Finley, who is an Army veteran, “a true military leader.”