The Economic Action Group, a downtown development advocate and fiscal agent for the statue project, will be the grant recipient.
0
Dec 10, 2019 8:27 PM By: Mahoning Matters staff 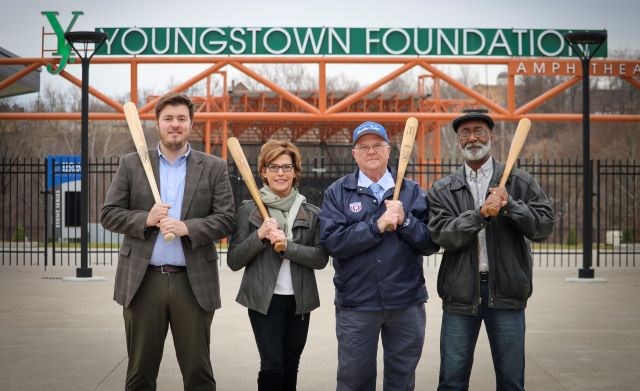 A $50,000 grant from the Youngstown Foundation has put fundraising for the Robinson-Shuba Commemorative Statue on base. From left are Nick Chretien, program manager for the Economic Action Group, the project's fiscal agent; Jan Strasfeld, executive director of the Youngstown Foundation; and Greg Gulas and Ernie Brown, co-chairmen of the statue project committee. (Contributed photo)

YOUNGSTOWN — Supporters of a downtown Youngstown statue to mark the historic 1946 handshake of baseball Hall of Famer Jackie Robinson and George "Shotgun" Shuba of Youngstown on Tuesday announced a $50,000 grant for the project from the Youngstown Foundation.

"This grant is a fast, big and important step toward our goal of raising $400,000 for this project," Ernie Brown, a co-chairman of the Robinson-Shuba Commemorative Statue Committee, said in a news release. "We deeply appreciate the leadership and generosity of the Youngstown Foundation."

Jan Strasfeld, executive director of the Youngstown Foundation, said its governing board instantly recognized the importance of the Robinson-Shuba statue, which would memorialize the first interracial handshake in modern professional baseball.

"This statue recognizes the role ‘one of our own’ played in an important historic moment that helped advance racial equality in American sports and culture," she said. "There is no city more appropriate than Youngstown, a true community of excellence, for a larger-than-life statue that honors Jackie Robinson's achievements and George Shuba's respect for them."

The Economic Action Group, a downtown development advocate and fiscal agent for the statue project, will be the grant recipient. The statue committee will also approach other foundations and potential donors.

"The Youngstown Foundation grant not only provides an early financial boost but tremendous credibility to our fundraising efforts," said Nick Chretien, program manager for the EAG. "We're appreciative of the Youngstown Foundation’s support and confident that many others will want to support this project because of the important moment it celebrates."

Individual contributions are welcome at the project's GoFundMe page.

The historic handshake occurred on Opening Day 1946, when both Robinson and Shuba were playing for the Montreal Royals, a farm team for Major League Baseball's Brooklyn Dodgers. A huge crowd was on hand in Jersey City, N.J., as Robinson became the first African-American player in mainstream professional baseball.

In his second at-bat, with two other Royals on base, Robinson hit a home run. Neither of the teammates who scored on the homer moved to congratulate him.

Shuba, the on-deck batter, noticed that, so he stepped up to shake Robinson’s hand just as the future Hall of Famer was crossing home plate. Several photos captured that moment — the first handshake of black and white players on a professional baseball diamond.

Plans call for the statue to be dedicated April 18, 2021, the 75th anniversary of the handshake. The proposed site for the statue is near the Youngstown Foundation Amphitheatre, 201 S. Phelps St.

A photo now owned by George's son, Mike Shuba of Youngstown, will be the basis of the statue, which will stand nearly 7 feet tall. Marc Mellon, a Connecticut sculptor whose works have honored Pope John Paul II, President George H. W. Bush, President Barack Obama and many award-winning athletes, has agreed to craft the bronze Robinson-Shuba statue.

The Youngstown Foundation, established in 1918 by a group of prominent industrial leaders with an initial gift of $33,000, has donated more than $100 million over its 101-year history. It is one of the largest grant makers in Northeast Ohio.