If the NCAA continues the shutdown into the fall, athletes still will receive their scholarships. Some coaches and staff, however, could be part of a university furlough.
May 5, 2020 4:52 AM By: Tom Williams 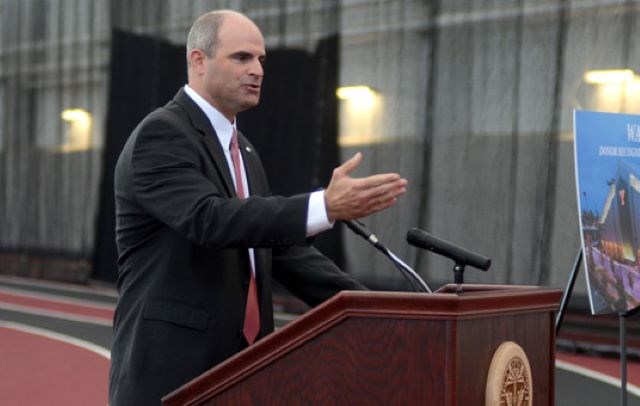 YOUNGSTOWN — As the second-month anniversary of the sports shutdown approaches, no one knows  when athletes will be allowed to compete and fans will be permitted to watch.

It's frustrating. But imagine you are in charge of a $16 million athletics department and the time is fast approaching when the next budget is due to be finalized.

On the one hand, Strollo doesn't know how much money his department will have for the 2020-21 school year. On the other, no one knows when the NCAA will allow college athletics to resume.

It could be this summer.

“The last six weeks have been indescribable,” Strollo said of the shutdown that benched America’s athletes in mid-March.

Strollo said his biggest frustration is with the “unknown. You’re trying to plan, but it is what it is.

It’s possible the NCAA will continue the shutdown into the fall. If that happens, Strollo said athletes still will receive their scholarships.

But some YSU coaches and staff might be part of a university furlough.

“We’re still committed,” Strollo said of scholarships. “When you look at our budget, a third of it is scholarships.

“It’s money we spend to get [athletes] to come to the school, but that is money that comes back to the university as revenue.”

Strollo was referring to athletes in YSU’s three revenue programs — football and men’s and women’s basketball.

“Very few of our kids are on full scholarships,” Strollo said.

Some of the football and basketball coaches have multiyear contracts, “and those are somewhat guaranteed,” Strollo said.

The future hinges on testing for COVID-19.

Friday, Dr. Brian Hainline, the NCAA's chief medical officer, said in an Associated Press interview that widespread testing for coronavirus will be crucial to having college sports in the fall, especially contact sports like football.

“It’s not going to be risk-free, that’s for sure,” Hainline said. “If this is rolled out in stages and reasonably, we’re really paying attention to proper surveillance and we get the tests available, I think we can have fall sports.

"My concern is if we just rush into this too quickly because of this almost sense of desperation, that we just have to get going.”

On Friday, the NCAA's COVID-19 Advisory Panel released guidelines for sports to resume. Those guidelines follow the three-phase plan the White House released two weeks ago to restart the economy.

“Once COVID-19 infection rates diminish for at least two weeks, resocialization of society and sport may be possible,” the NCAA guidance states.

The NCAA is recommending a three-phase plan, with practice facilities reopening in phase three.

Ohio Gov. Mike DeWine has not mentioned a time frame for phase three as the state slowly reopens.

In discussions with NCAA leaders and government officials, Hainline said talks centered on what has to happen for sports to resume.

"And I will tell you that 80 percent of the conversation centered around testing," Hainline said. ”And more specifically, what happens in contact sports like basketball or football, when one of the players tests positive.

While testing in Ohio has increased in recent weeks, it's doubtful there are enough tests available to allow athletes to get them regularly.

And it's not just colleges who need to test. NBA and NHL officials have hinted of resuming their suspended seasons in July in an effort to crown a champion. Plenty of tests would be needed for that to happen.

Major League Baseball officials have speculated that games could resume in late June, hinting of a reduced schedule and the World Series being played somewhere warm around Thanksgiving.

The National Football League has not yet released its schedule. Officials have hinted of the regular season not beginning until mid-October, with the Super Bowl being played on Feb. 28.

Closer to home, Strollo is awaiting word from the YSU Board of Trustees and President Jim Tressel on how the university is going to handle having much less revenue to budget for 2020-21.

“We don’t have [those numbers] yet,” Strollo said.

A smaller university budget will impact how many sports get played. Tressel said last week that YSU has lost $2.2 million in state funding since February and another $3 million in student fee refunds caused by the school switching to virtual classes because of the COVID-19 pandemic.

Employee furloughs are being considered across the board. They could include coaches and staff in the athletics department.

“They [could] partake in salary reductions or furloughs,” Strollo said.

The athletics department received $12.6 million. The rest of the sports budget —  $3.5 million — was expected to be generated from ticket sales and sponsorships.

YSU is projecting an $8.7 million reduction in state funding and loss of another $1 million in investment income during the 2020-21 fiscal year, Tressel said. Some of that lost revenue will affect the athletics department, which received about 8 percent of the university’s 2019-20 budget.

Another hit is coming from the NCAA. Last month, Strollo told WFMJ that YSU’s share would be approximately $350,000, down from an anticipated $1 million. Cancellation of the men’s basketball March Madness tournament is a major reason that all schools will get much less.

Strollo said the one good thing about the March 12 shutdown is that it came after “our revenue sports seasons had ended.”

YSU’s baseball, softball and track and field teams ended up competing in fewer than half of their scheduled events.

“There was some savings there,” he said of canceled road trips. “But not anything real significant.”

Other savings come from students not being on campus this summer.

Strollo said no one knows when the training facilities can reopen, saying that DeWine will make that decision.

“As the state begins to open up, we’re following the guidance from Columbus and the experts here on campus,” Strollo said. “What makes it easier is that we know we are not going to have classes face-to-face this summer. So we know our student-athletes won’t be here.”

Strollo said he’s had conversations with league rivals to find ways “where we can work together to try and lower our expenses.”

He admits it’s hard not to focus on the uncertain future.

“Constantly thinking about it,” he said. “People on campus are asking what the different scenarios mean to the bottom line.

“Obviously, these are very unique times.”