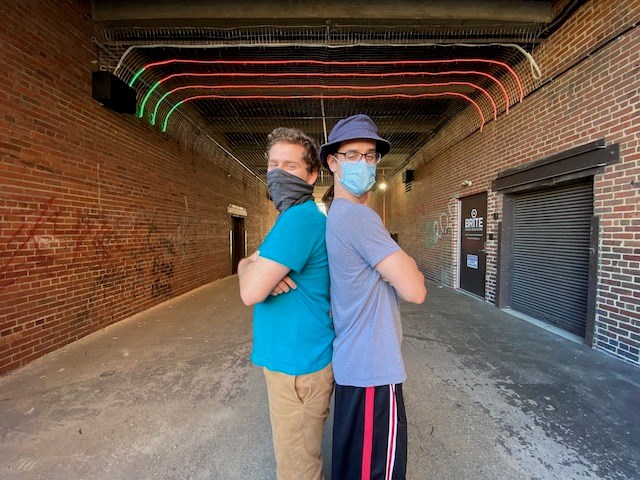 The first installation of the structure was expected to go up this past weekend.

Galvin said the display will be controlled by a touch screen kiosk with an accompanying sound system. People passing through the alley will be able to pick a song through a music streaming service, similar to a jukebox, and the music will sync with the lights.

Chromaticity also plans to install cameras to the alley in spring 2021 to track movement and will light up the alley as people walk by or cars pass through. Some possibilities for the motion sensor display include interactive games, animations that coincide with the weather and a standby default setting for when there isn’t motion.

Galvin, who is the lab intern at BRITE Energy Innovators, told Mahoning Matters when the team was considering adding a mural to David Grohl Alley to make it more “welcoming,” he brought up the idea of an interactive lighting display to CEO Rick Stockburger.

Once Stockburger was on board, Galvin brought on classmate Andy Boyer to assist with the project.

Boyer, a computer digital electrical engineering student at YSU, stepped in after his internship was canceled due to the COVID-19 pandemic. He and Galvin formed a friendship during a calculus course at YSU.

“We really, I guess, made a friendship through that and stayed in contact for multiple years. Back then, though, that's when he really started the engineering and building prototypes and stuff,” Boyer said. He talked to me a lot about the company and where he wanted it to be eventually and bounced ideas and stuff, so I was always in that bubble of it, but not really super involved.”

“He called me up [this] summer and was like, ‘[Do] you want to try and do something like this?’ And then I was like, ‘Yeah, sure, I'll get some stuff together. We can start like pricing this out, write some proposals and stuff.’ It just kind of came together,” he added.

Though the lighting display aims to add pizzazz to the downtown area, Chromaticity wants to enhance safety in the area as well.

“The [City of Warren] actually brought up the safety of the alley. So being the [Robins Theatre] right here, people park in the parking deck, right behind the block, and they walk right through David Grohl Alley and it was very dark, and people did not feel safe,” Galvin said.

“They had some lights up in the alley, but they were well out of date. They're just like incandescent bulbs. A lot of them were broken and didn't really provide that much light either. So we wanted to revamp that pretty much,” Boyer added.

As for the future of Chromaticity, Galvin and Boyer both plan to pour their efforts into the business after graduation.

“I'm probably going to grad school at YSU and then just working on the business trying to expand, look at more commercial sales. Bigger contracts, bigger projects, you know, eventually hiring some people to start doing stuff for us because this was just absolutely insanity for just two people that try to do all of this,” Boyer said.

Galvin and Boyer hope to have the programming completed for the David Grohl Alley lighting display by the end of September, but predict that the motion controls won’t come until spring.