Moot court is a simulation of a court proceeding for students to practice for researching and arguing cases. The YSU moot court team is ranked 6th in the nation for moot court oral advocacy.
Sep 18, 2020 4:24 AM By: Ellen Wagner 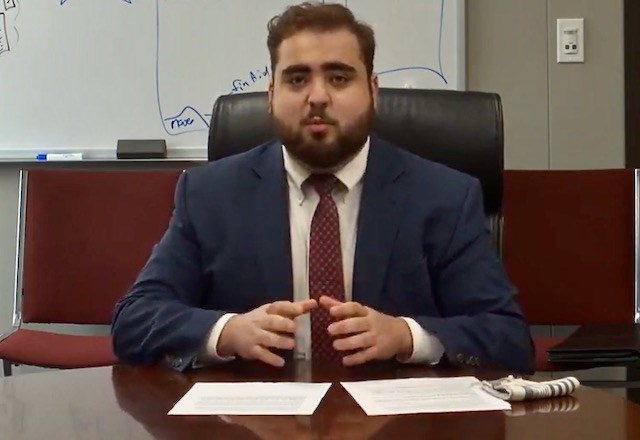 Michael Factor is among undergraduate students on the Youngstown State University Moot Team who was given a hypothetical case to research and argue during a Constitution Day livestreamed public practice session.

Michael Factor, Jason Long, Nickiforos Mastorides and Nadine Jones are undergraduate students on the YSU team that was given a hypothetical case to research and argue in moot court, a  simulation of a court proceeding to give students a chance to practice for researching and arguing cases.

The hypothetical case was a U.S. Supreme Court appeal that involved a shop owner who creates custom made items for weddings and refuses to provide services to a same-sex couple. The owner was charged with violating a public accommodations law and is denied a city contract, based on his financial donations to groups that oppose same-sex marriage.

Factor and Long argued for the petitioner, and Mastorides and Jones argued for the respondent’s side. Each student has about 10 minutes to examine the protections the First Amendment offers through freedom of speech and freedom of association.

The new rankings for the American Moot Court Association were released Thursday. YSU is ranked 6th in the nation for moot court oral advocacy.

YSU Professor Paul Sracic of the Department of Politics and International Relations and the Rigelhaupt Pre-Law Center, said in an email that the success of YSU’s undergraduate moot court demonstrates why the university is "one of the best places to go in the state for students intending to go on to law school."

Constitution Day is a federal observance that recognizes the adoption of the United States Constitution.