YSU preps to reopen campus as union warns of strike

An hour before President Jim Tressel provided an update on the fall semester via Facebook live, members of YSU-OEA — the union that represents YSU faculty — voted to issue a 10-day notice to strike.
Jul 16, 2020 4:11 AM By: Jess Hardin 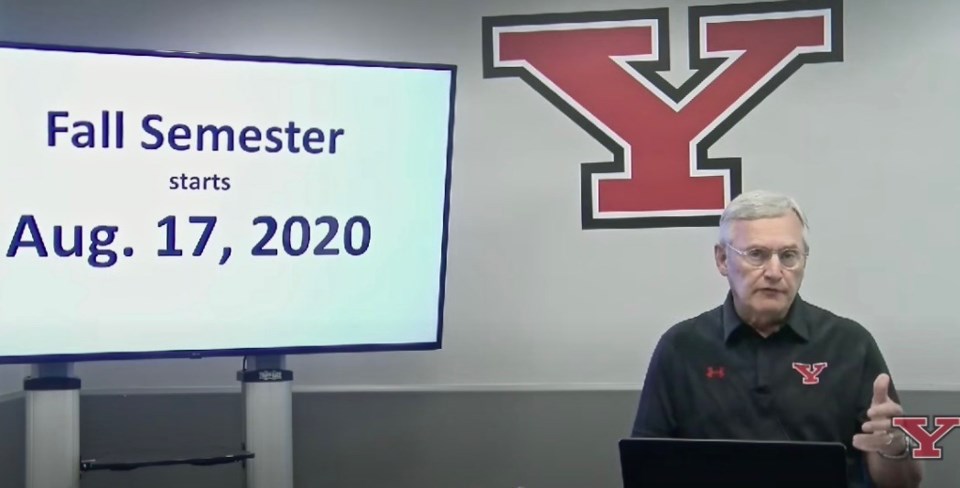 YOUNGSTOWN — As Youngstown State University administrators plan to welcome students back to campus in about a month, the faculty union has taken a step toward its first strike in 15 years.

An hour before President Jim Tressel provided an update on the fall semester via Facebook live, members of YSU-OEA — the union that represents YSU faculty — voted to issue a 10-day notice to strike. A similar notice, which did not result in a strike, was issued in October 2014.

Tressel did not mention the vote during his presentation Wednesday afternoon.

Instead, he outlined the university’s plans for bringing students back to campus to start the fall semester on Aug. 17.

"There are uncertainties," Tressel said, "but we're ready for every one of them."

He announced a campaign — “For Pete’s Sake… Protect Your Fellow Penguins” — that relies on the personal responsibility of students to keep the university pandemic-free.

Masks will be required on campus for students, faculty and staff, Tressel said. He did not address whether the university will provide masks or who will be in charge of enforcing the requirement.

Students will be asked to monitor their temperatures and stay home if they experience any COVID-19 symptoms, such as a temperature above 100.4, coughing and shortness of breath.

Also, wipes and sanitizers will be available in classrooms. Faculty and students will be responsible for wiping down classrooms after using them.

Tressel also outlined the plans for classes in the fall. Instruction will be delivered in one of five ways:

Students can check their portals on Monday to determine how their classes will be structured. More information about YSU's reopening plan can be found at the university's website.

"We’ve really gotta finish this summer strong with doing a good job of keeping that curve flattened and getting those little spikes pushed down a little," Tressel said.

Unionized instructors’ plans to return to campus in the fall are less clear.

Of the 282 YSU-OEA votes, 97 percent voted in favor of authorizing a strike.

"Although a strike is not imminent and a second strike vote would need to be administered to YSU-OEA before such a step could be taken, today's vote clearly indicates that YSU's faculty will not accept a contract designed to fundamentally dismantle shared governance," a union release states.

The decision was spurred by the university's academic restructuring plan, which reduces the number of academic colleges from six to five by combining the Beeghly College of Education and the College of Liberal Arts and Social Sciences. The plan was announced May 28.

Additionally, more than 50 classified and professional staff from across the university were laid off during reorganization this summer.

If the unit votes to strike, the strike would not take place until mid-August, when YSU-OEA's current contract ends.

A fact-finder's report will be issued in August or September, at which point, the public will receive details about the contract proposals.