“If we’re formulating opinions and we’re voting based on our opinions and participating in social discourse, it’s important to know what we’re talking about,” Pettitt said.
0
May 23, 2020 8:01 AM By: Jess Hardin 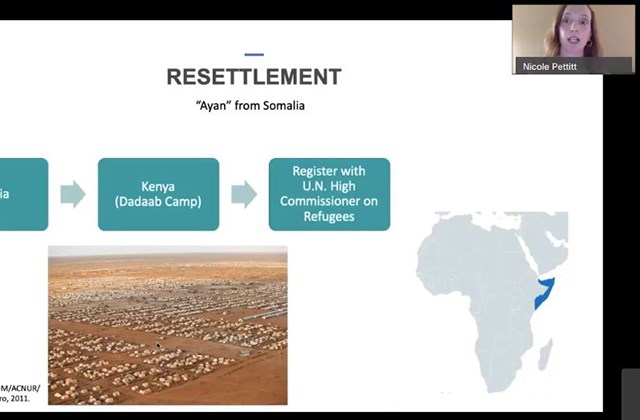 YOUNGSTOWN — When Youngstown State University Assistant Professor Dr. Nicole Pettitt started watching Gov. Mike DeWine’s coronavirus briefings, she noticed the American Sign Language translator and wondered whether the essential information was being translated for other minority communities, including the thousands of refugees who live in Ohio.

Her concern for the state’s refugees stems from her work as professor in the English Department: She focuses on applied linguistics and TESOL, or Teaching English to Speakers of Other Languages.

As part of an ongoing lecture series hosted by YSU’s Office of Alumni Engagement, Pettitt addressed misconceptions about refugees and the resettlement process in a webinar last week on the myths and realities of refugees.

She started working with refugee students in her hometown of Minneapolis in 2001. Since moving to Youngstown in 2017, Pettitt said she has encountered a lot of misperceptions and misinformation about refugees. She reached out to Mahoning Matters in January after noticing several in the comments on a Facebook post about an article on Gov. Mike DeWine’s decision to allow Ohio to continue to receive refugees.

“Clearly there are feelings about this,” Pettitt said. “If we’re formulating opinions and we’re voting based on our opinions and participating in social discourse, it’s important to know what we’re talking about.”

While living in Minneapolis, Atlanta, Phoenix and now Youngstown, Pettitt said she found the public’s understanding of refugees seems to depend on the amount of contact they’ve had with refugees.

While discussing misconceptions about refugees in the United States, Pettitt brought up the argument that the U.S. has the largest refugee resettlement program in the world.

The factoid is technically true, but without context, it contributes to the false idea that the U.S. has fluid borders and accepts anyone fleeing their home nation.

To parse this out, Pettitt defined the word “refugee.”

Refugees apply to be resettled when they are outside of the country they would eventually be resettled in. The refugee population not include asylum seekers, undocumented immigrants or anyone seeking legal status from within the U.S.

That number varies from year to year, depending on a variety of factors like the national political mood and humanitarian crises.

For example, the number of refugees resettled in the U.S. increased in 1989 when the Soviet Union fell and another peak in 2016 coincided with the Syrian civil war. Still, resettled refugees made up just 0.2 percent of the U.S. population in 2017.

During last week’s event, Pettitt explained the rigorous process of refugee resettlement in the U.S.. People fleeing persecution or war in their home country might travel to a neighboring country and apply to be resettled; this process is known as third-country resettlement. While no one is forced to resettle in a particular place, the destination is not the choice of the refugee, Pettitt said.

In terms of refugee resettlement in raw numbers, Ohio ranks sixth in the United States, having resettled 1,500 refugees in 2019. The state receives the most third-country refugees — people who flee their country of origin and apply to be resettled elsewhere — from Bhutan, Somalia and the Democratic Republic of the Congo.

Refugees aren’t resettled in Youngstown. The area doesn't have a local resettlement agency, and refugees are typically resettled in cities based on existing ethnic groups. Refugees who come to Ohio are resettled in Cleveland, Akron, Toledo, Dayton, Cincinnati or Columbus, which has a large Somali population.

Refugees from more than 50 countries have resettled in Ohio in the last decade, hence Pettitt’s concern about access to information and translation services during the pandemic. In collaboration with immigration support provider Thrive Mahoning Valley, Pettitt has worked to collect and share COVID-19 resources in additional languages.

So far, the Ohio Department of Health’s COVID-19 resources, found on coronavirus.ohio.gov, are available in English, Spanish, Arabic, Mandarin and Somali. Some cities and community organizations, like the Bhutanese Community of Central Ohio, share translated information about the virus, WOSU reported in late March.

You can see Pettitt’s presentation on Facebook. She's also created a document to share more information about refugees, which can be found here.