This new back-and-forth comes as both sides wrapped up afternoon negotiations behind closed doors in an attempt to hammer out a deal as the YSU-OEA strike continues on Day. 3. Negotiations were set to resume at 9 o'clock tonight.
Oct 14, 2020 7:24 PM By: Jess Hardin 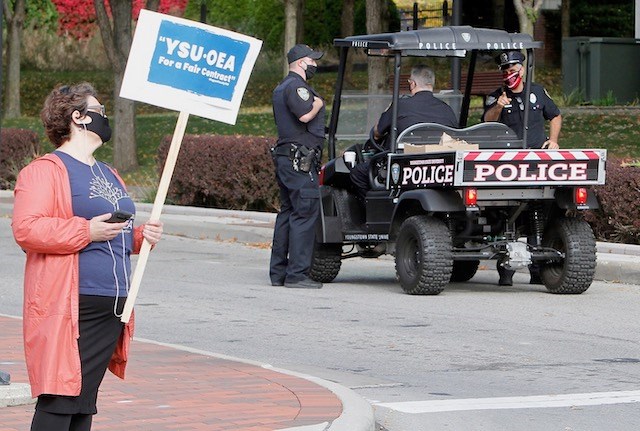 As the strike got underway Monday, YSU police officers were present at most intersections. Bob Yosay | Mahoning Matters

YOUNGSTOWN — The Youngstown State University administration today offered a new contract proposal to striking faculty that includes increasing base salaries by 4 percent, according to a university news release.

Hours later, the YSU-OEA fired back, alleging the proposal "could damage" YSU's future.

This new back-and-forth comes as both sides wrapped up afternoon negotiations after an afternoon behind closed doors in an attempt to hammer out a deal as the YSU-OEA strike continues on Day. 3. Negotiations were set to resume at 9 o'clock tonight.

The new proposal includes no pay raise in the first year and base pay raises of 2 percent in both the second and third years, the university said. The last proposal called for base raises of 0-1-2 percent.

“This offer is more than fair given the university’s difficult financial challenges, not to speak of the many unknowns moving forward with the Covid-19 pandemic,” said Anita Hackstedde, chair of the YSU Board of Trustees. “We are hopeful that the faculty will accept this offer, call off the strike and return to the classroom in support of our students.”

However, the union fired back a few hours later. While acknowledging the administration has moved on issues of salary and healthcare, YSU-OEA President Steven Reale accused the administration of "steadfastly [refusing] to budge on the language that hits at the core of what we do as faculty,"

The union disputes the administration's messaging that faculty are striking solely over financial issues. Of equal importance are issues of intellectual property and shared governance of academic operations, he said.

The YSU-OEA contends that if "shared governance" erodes, the faculty will have no say in the operations of their departments and the election of chairpersons.

Today’s session started a bit later than 1 p.m. as both sides sought more time to work on their proposals, according to sources.

At one point, YSU-OEA spokesperson Mark Vopat told Mahoning Matters he had gotten word from YSU-OEA President Steven Reale who said it’s possible both sides might need another day for negotiations.

But in the release, YSU President Jim Tressel said, “The terms of this offer, we believe, are such that we hope to resolve this contract today.”

There’s no word yet on when parties will meet Thursday.

Meanwhile, as students returned from the end of fall break, many classes today were run by "full-time faculty who have chosen not to go on strike, part-time faculty and other qualified instructors” according to the university.