Located at 4350 Boardman-Canfield Road, formerly Peaberry’s Cafe, Napa Grocery hopes to “take the restaurant business and sort of turn it on a side a little bit” said co-owner Nunzio Scordo.
Jun 7, 2021 4:25 AM By: Alyssa Weston 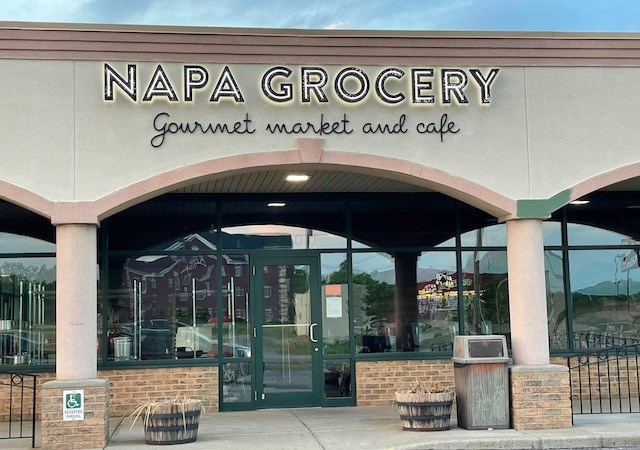 Napa Grocery Gourmet Market and Cafe is aiming to bring farm-to-table cuisine and specialty food items to the Mahoning Valley when it opens in Canfield next week. (Photo provided)

CANFIELD — Napa Grocery Gourmet Market and Cafe is aiming to bring farm-to-table cuisine and specialty food items to the Mahoning Valley when it opens next week.

Located at 4350 Boardman-Canfield Road, formerly Peaberry’s Cafe, Napa Grocery hopes to “take the restaurant business and sort of turn it on a side a little bit” said co-owner Nunzio Scordo.

Scordo, along with longtime friend and chef Aaron Hynek, plans to use using their combined culinary background to launch this passion project. The two met in Key West working as chefs at a hotel.

Scordo said the duo always planned to open a small business together but didn’t realize that nearly 20 years later they’d find themselves so close to Scordo’s hometown of Youngstown.

“In Key West, we're trying to put this together and we just couldn't put the money together. The real estate was just ridiculously expensive, and so we kind of put it on the back burner. [Then] we both kind of moved on and did our own things and stuff. “ he said. “When I moved home just this past November, he lived here. I said, ‘Look, let's do this.’”

Scordo has had a fruitful career as a chef, spending 10 years in Florida in the mid-1990s, then going on to open three restaurants in Raleigh N.C. in the past eight years.

Most recently, Scordo continued his education at an artisan bread school in San Francisco and wants to bring what he learned to the Mahoning Valley.

Scordo wants Napa Grocery to stand out from the traditional Italian markets in the area by introducing California Cuisine, based on the ideal of farm-to-table cooking, to the menu.

“We want to specialize in domestic products, but we [also] want to specialize in the best products we can find whether they're from Italy, or Spain or France, or, you know, Holland. It doesn't matter,” he said. “As far as the cooking goes, the cooking is based on the premise of seasonal cooking ... true farm-to-table cooking from what you have available, the best of it, and not using what’s not in season.”

“It's gonna be the place you want to go to if you don't want to go home and cook,” Scordo said.

Scordo told Mahoning Matters that the most notable menu item will be the Roman-style pizza, which he recently learned to make from a master pizzaiolo from Rome. That style of pizza features a fermented dough with very high hydration, which means it has a lot of water content compared to other doughs, Scordo said.

“When you bake it, it's the lightest, airiest [pizza] with a slight crispy that you'll ever have in your life. And the fermentation process actually breaks down the gluten. So people that are gluten sensitive, won't feel this pizza,” Scordo said.

Napa Grocery will have some permanent menu items that customers can expect each time they visit, while the rest of the menu items will rotate. In addition to it’s menu, Napa Grocery will carry specialty products, like sauces and condiments and bronze dye pasta for sale.

We’ll have about 20 seats like cafe-style seating, where you can grab your stuff and if you want to sit and hang out there you can. The rest of its market and then we've got a little room in the back where I think is going to end up being private dining,”

“This is the time for this concept,” Scordo said. “The restaurant and food industry has changed so much over the last 18 months ... there's no better [time for this] opportunity.”

Out and about — Mahoning Paddle and Pedal offers recreational rentals
Jul 26, 2021 4:25 AM

This story was made possible by our Community Leaders Program partner.

Thank you to Farmers National Bank for helping to expand local news coverage in the Mahoning Valley. Learn more