It’s rare that adolescent dreams turn into reality, but Marisa Sergi told Mahoning Matters that as she looked through her childhood mementos last month, she found reminders that winemaking was always her passion.
Aug 10, 2020 4:26 AM By: Alyssa Weston 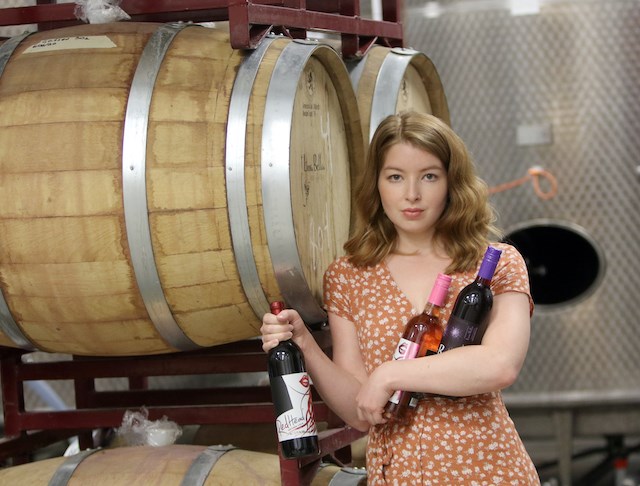 She and her fiancé, Evan Schumann, recently took ownership of L’uva Bella Winery. The winery has been in Sergi’s family for 16 years, and now she is serving as the winery's CCO, and Schumann is president and CEO.

It’s rare that adolescent dreams turn into reality, but Sergi told Mahoning Matters that as she looked through her childhood mementos last month, she found reminders that winemaking was always her passion.

“I found a bunch of journal entries and things from my past, in high school and elementary school, that really described how I always enjoyed winemaking and I wanted to take over the family business when I grew up. It’s really cool to see that I felt so strongly about being involved in the business from such a young age,” she said.

In 2012, Sergi wanted to contribute to the family business by using her creative eye to redesign wine labels. That’s when she got the inspiration to create a wine label that would eventually become her claim to fame — RedHead Wine.

“I wanted to create a [label] that had my personality as a redhead. So I decided, well, maybe just make a redhead-themed wine and make it sweet and spicy and sassy and really reflect the personality of a redhead,” she said. “Once they had the label design, they really liked it.”

Coincidentally, Sergi had to complete a capstone project in order to graduate from her viticulture and enology program at Cornell University. She decided to take her RedHead Wine label and create actual wine to sell in retail stores and do a case study about the process.

The project was successful, gaining Sergi the Cornell Class of 2016 Viticulture and Enology Capstone Award at graduation.

“People who worked in the industry said really great things about my brand, so I decided to go forward. I pretty much placed in every single business plan competition I entered,” she said.

Sergi then spent a short stint working full time in California to gain more experience before dedicating her full attention to RedHead Wine.

RedHead Wine went from a passion project to retail success in 2017 with the help of Walmart’s Open Call program.

“Things became very well-validated once Walmart gave me a chance to sell with them in 2017. Since Walmart's a global leader in retail, if they're interested in something, it really showcases that there's a real business case to a product or brand. So it really helped me get national attention, which opened a lot of doors,” she said.

Although Walmart trailblazed RedHead Wine’s success, Sergi emphasized how local “mom and pop” shops in the Mahoning Valley, who gave Sergi her first selling opportunities, widely contributed to her success.

“Without them giving us a chance, in the beginning, there wouldn’t be a story to tell,” she said.

As a third-generation winemaker, Sergi said her lifelong passion for wine “makes sense.”

“In 1953, my grandparents immigrated to America from Italy with a suitcase and a dream. They couldn't fit a barrel of wine in their suitcase, so they brought the tradition of winemaking along with them instead. My fascination with winemaking started at an early age. I crushed my first grape clusters with my grandfather and father as a child and, sticky hands and late nights notwithstanding, I fell in love forever,” Sergi wrote on RedHead Wine’s website.

Now Sergi and Schumann are carrying on the family traditions at L’uva Bella Winery by combining their professional interests.

“[Schumann is] a fifth generation of a manufacturing company that’s over 100 years old, and he also started multiple companies that gave him the experience to take over the winery as well,” she said.

Sergi told Mahoning Matters that she and Schumann bought L’uva Bella Winery full out from her parents.

“We want to provide high-quality jobs to the local area. It's something that is really important to me. The more we grow and the bigger we get, the higher-paying jobs [we can] provide as well as more people we can hire from the area and really revitalize part of the community,” she said.

“We actually hired three new people throughout the pandemic in high-paying jobs. So we plan to continue to do so. There's always an open door for the community to apply and take interest in finding a career at L’uva Bella as we continue to grow,” she added.

In addition to Redhead Wine, L’uva Bella Winery is known for its Purple Rain Concord and Passion Blackberry wines. She added that the asiago stuffed gnocchi and blackened chicken Alfredo are among the most popular menu items from the winery’s bistro.

“One thing we did add to the bistro is an interactive wine pairing menu, so you can either choose to have a classic dish with a glass of wine or you can have small plates that are perfectly paired with some of our exclusive wines. So people have really been enjoying that so far,” she said.

The L’uva Bella winemaking talents will remain the same, but the winery is offering a new program to share the wealth with other winemakers, too.

“We have a new program this year for custom crush where local wineries, or wineries out of state, come to us to do custom crush programs where they’re coming to us and saying, ‘Hey, we want a traditional Russian River Valley pinot noir,’ and they’re going to be involved from start to finish,” she said.

“We can help other wineries provide high-quality wines for their facility while using our high-end equipment. So that's something that we're excited about,” she added.

Additionally, Sergi said she is in the process of signing a large contract with a national distributor and plans to expand to at least two more states this year.

Although it was hard to source supplies for a few months during the height of the pandemic, L’uva Bella Winery is stocked for the rest of the year, Sergi said.

Out and about — Mahoning Paddle and Pedal offers recreational rentals
Jul 26, 2021 4:25 AM

This story was made possible by our Community Leaders Program partner.

Thank you to Farmers National Bank for helping to expand local news coverage in the Mahoning Valley. Learn more