"There’s nothing like being under the stars and cars with the security of being in your own vehicle. So under these times of COVID-19, it’s a great place to go and get out of the house, be in a safe environment and have a lot of fun,” owner Mark Hocevar said.
Jun 29, 2020 4:26 AM By: Alyssa Weston 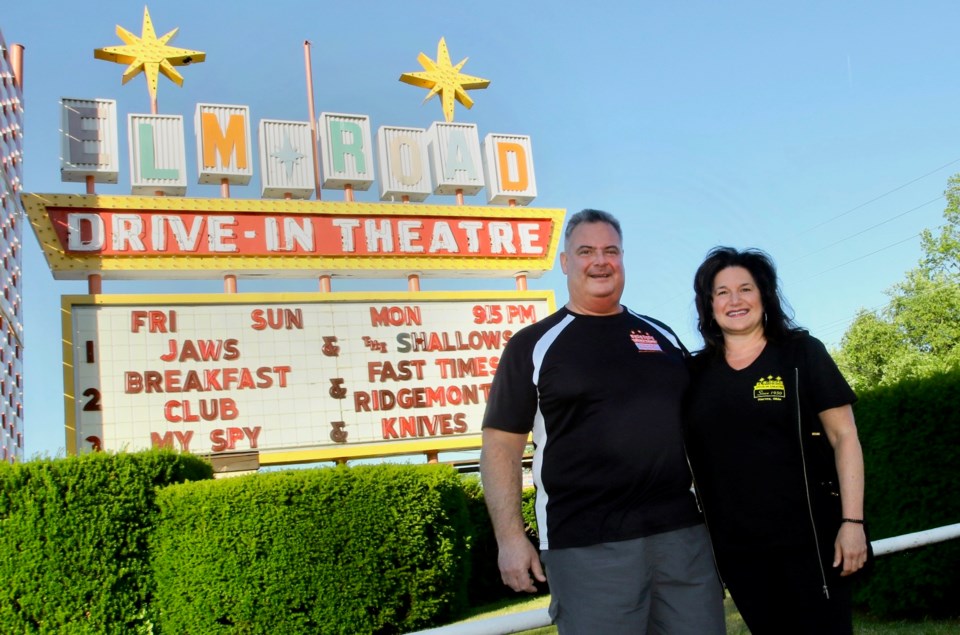 Mark and Sheri Hocevar are the third owners of the Elm Road Triple Drive-In Theatre which celebrates its 70th anniversary this year amid a resurgence during the COVID-19 pandemic. (Robert K. Yosay | Mahoning Matters)

WARREN — The Elm Road Triple Drive-In Theatre gives moviegoers a retro cinematic experience, as one of approximately 310 drive-ins in the United States.

But the COVID-19 pandemic has pushed the drive-in to take on some “firsts” this summer.

“It was absolutely phenomenal. It was a huge success, and we're looking forward to more concerts in the future,” said Mark Hocevar, owner of Elm Road Triple Drive-In Theatre.

According to Hocevar, more than 400 vehicles were in attendance, and all three movie screens were utilized for the concert.

The drive-in celebrates its 70th anniversary this year and has remained a family business since it was built in 1950.

“[Drive-ins are] truly a unique American experience. There’s nothing like being under the stars and cars with the security of being in your own vehicle. So under these times of COVID-19, it’s a great place to go and get out of the house, be in a safe environment and have a lot of fun,” Hocevar said.

Hocevar and his wife, Sheri, are the third owners and officially gained ownership in 2019. Sheri is the granddaughter of founder Stephen Hreno.

“We’re an original family-owned operation, and that makes us kind of unique, and we’re proud of that. There’s other drive-ins, but they’re not the original founders and owners,” Hocevar said.

Both Mark and Sheri grew up in the Mahoning Valley but lived in Michigan for a while before officially moving back to the area in 2013. Before moving back, they were the long-distance managers, and the family drove from Michigan to Ohio each weekend to help Sheri’s parents, the owners at the time, with the operation.

As “a true family business,” Hocevar said his three children help run the operation. His son Jacob, a manager, said he grew up working at the drive-in.

“I’ve been working there since I was probably 6 or 8 years old,” Jacob said. “We didn’t end up moving to Ohio until I was about 16, and up until that time we would drive up every weekend to help work at the drive-in.”

Although Elm Road Triple Drive-In Theatre has made changes to adapt to the COVID-19 pandemic, Jacob said that in many ways the drive-in can operate mostly as normal during a pandemic.

“We didn’t even have to accommodate parking because you’re in your own vehicle. Even if you park right next to each other, you’re still 6 feet apart and you have two doors between each person, so there are no germs being passed,” he said.

During the COVID-19 pandemic, all staff members wear masks and gloves, and changes have been made to the concession area.

Customers who must wait for a food order are given a pager so they can wait outside the concession area until they are signaled that their food is ready. This is to encourage customers to spread out instead of all waiting in a small, crowded area.

“There are very few businesses today that can endure year-round expenditures and only be open for business for 120 days, and we’re limited by weather and can only operate certain hours. So if we have a bad weekend or a bad night, that’s lost revenue and lost business that we cannot recover,” Mark said.

In order to adapt to the lack of new movie releases coming out of Hollywood this summer, Elm Road Triple Drive-In Theatre is showing classic movies like “Jaws” and “E.T.”

According to Jacob, new releases are expected to be shown in July, but they have not been given official dates yet. Mark said studios may be reluctant to release movies until more movie theaters are open in highly populated areas.

For Mark, embracing these unconventional events at his business is a fairly recent development. Previously, government-mandated health and safety restrictions for venues discouraged the drive-in from hosting events until it was feasible to meet all guidelines.

“We had our hands full just trying to be able to open and operate,” he said.

Additionally, Jacob told Mahoning Matters that the drive-in has been in contact with local car groups and military clubs to hopefully collaborate on events in the future. He said they are monitoring the COVID-19 pandemic before committing to these events.

“Our venue is relatively unchanged in terms of how we present things, and people have come to us because of our ability to operate under COVID-19,” Mark said. “We’re looking into every opportunity to expand our reach and our customer base.”

Elm Road Triple Drive-In Theatre is open weekly from Thursday to Monday. The box office is open Friday and Saturday at 7 p.m. and on Sunday and Monday at 8 p.m.. The first showing begins at 9:15 p.m.

Adult tickets are $10, and children’s tickets are $5. Children under age 3 are admitted free. The theater has three screens that each show two movies per night. All tickets are applicable for double features. The movie’s sound is broadcast through car radio in FM stereo.

Youngstown entrepreneur introduces Black Periodt movement
Jun 8, 2020 5:10 AM
Comments
We welcome your feedback and encourage you to share your thoughts. We ask that you be respectful of others and their points of view, refrain from personal attacks and stay on topic. To learn about our commenting policies and how we moderate, please read our Community Guidelines.