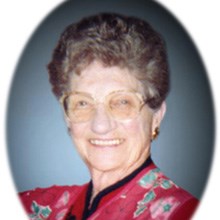 Mrs. Tibolet was born April 6, 1922, in Farrell, a daughter of the late James and Carrie (Colecchi) Colangelo. A lifelong area resident, she graduated from Sharon High School in 1940.

Ann was a devoted homemaker, and for 13 years prior to her marriage, was a telephone operator at the former Sharon Transformer Division of Westinghouse Electric Corp.

Ann was a member of Our Lady of Fatima Church, Farrell, where she was active in the church’s Altar Rosary Society, Bethany Club and its Women’s Guild, having served as a past president. She also volunteered in the kitchen for church fundraisers and was affectionately known as a “Cavatel Lady.”

She was also a member of the Delta Sorority’s Gradale Chapter for 67 years, and volunteered for the PTA at the former Geno Monti Parochial Grade School, Farrell, and the PTA at Kennedy Christian High School, Hermitage, and once served as its vice president.

She is survived three daughters, Terri Toplisek and her husband Timothy, of Laurel, MD, Bunny Stanislav and her husband Stephen, of Poland, OH, and Lisa Tibolet; two step-daughters, Cindy Pezzelle, and Karen Pollock; a son, Randy J. Tibolet, all of Sharon; two grandchildren, Stephen Stanislav and his wife Teresa and their children Amelia and Evelyn, of Marietta, GA, and Nina Stanislav, of Raleigh, NC; five step-grandchildren; six great step-grandchildren; and one great great grandchild.

In addition to her parents and husband, Ann was preceded in death by four sisters, Eleanor Serra, Flora Rocco, Emily Marks and Lillian Stigliano; and two brothers, Dom and Victor Colangelo.

There are no calling hours.