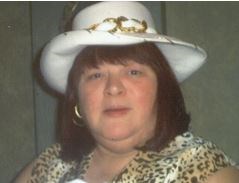 Beverly R. “Bev” Straw-Cooper, 68, of Warren, entered peacefully into eternal life on Saturday, February 8, 2020 at 9:50 p.m. in her home with her family at her side under the comforting care of hospice following a courageous and faithful battle with lung cancer.

Bev was born April 26, 1951 in Warren the daughter of the late Sam and Theresa Butler Straw and was a lifelong area resident.

In the beginning of her tenure as a licensed cosmetologist, Bev was the manager of Strouss’ Glenby and then continued working until becoming ill at the International House of Hair in Howland and was hairdresser for the Staton-Borowski Funeral Home in Warren.

She was a member of St. Elizabeth Ann Seton Parish-SS. Cyril & Methodius Catholic Church in Warren, where she belonged to the women’s crochet club.

Bev enjoyed crocheting and baking and spending time with her family.

Besides her parents, Bev was preceded in death by a sister Cindy Straw.

An Order of Christian Burial Service will take place at 11:00 a.m. in the funeral home with Fr. Frantisek Katrinak, Pastor of St. Mary's and St. John Paul II Parishes in Warren as celebrant.