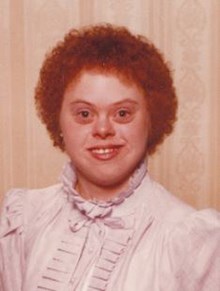 Cinthia Faith Modzelewski, has completed God’s journey on February 19, 2021 at the Windsor House. She was born April 28, 1966 in Harrisburg, Pennsylvania.
Cinthia is the daughter of Bill and Dolly Sonnenlitter of Girard, Ohio. She is survived by her sister,Trudee (Weatherby) of Youngstown, Ohio, brother, Eddie Sonnenlitter of Cleveland and sister, Carleen Pedziwater, and family Jim, Marek and Emily of Illinois. She is also survived by several Uncles and Aunts and many cousins.

Sister Denise Sonnenlitter, preceded her in death nineteen years ago. All her grandparents are deceased and also several Aunts, Sandy, Shirley and Betty.
Cinthia started her journey by beating all odds. We were told she wouldn’t survive past ten. She attended Gertrude Barber Center in Eris, Leonard Kirtz Youngstown, Fairhaven in Warren, and lastly the Purple Cat.

Cinthia had always exceeded everything she did. She played basketball, volleyball, and especially in swimming, as she earned many gold and silver metals. She was also a cheerleader for the Fairhaven boys basketball team. She also loved to bowl, and was an avid dancer. She also enjoyed music, puzzles, latch hook , art projects, and the church choir. Cinthia had a strong compassion for life.
Many will miss her. We want to express our sincere thanks and gratitude to all, Especially the Omni Manor in Austintown.
She has touched many people on her journey, and now she is at rest after a great struggle.

Calling hours will be held Friday February 26th from 11:00 AM- 1:00 PM at Blackstone Funeral Home with a service to follow at 1:00 PM. She will be laid to rest at Crown Hill Cemetery. The family requests any contributions be made to Hospice of the Valley, in Cindy’s name.