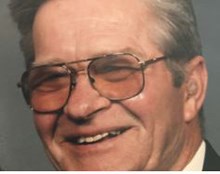 After a brief illness, on Sunday, June 28, 2020, Don Bernard Baker, age 89, of Canfield, passed at home surrounded by his family.  He was born in Marion, OH on August 5, 1930 to George Lawrence and Nellie Marie (Miers) Baker.

Don honorably served his country in the United States Army during the Korean Conflict earning a Bronze Star.

Besides his parents, Don was also preceded in death by his wife, Marilyn (Zeller) Baker and his siblings, George, Joseph, Richard.