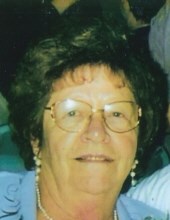 Dorothy M. Spitler, 89 of Mecca Township, died Saturday, January 4, 2020, at Windsor House of Champion. She was born July 2, 1930 in Venango, Pennsylvania, the daughter of the late Frank and Katie Luikart Black. She had been a 70 year resident of Mecca Twp. (Bristolville mailing address), coming here from Pennsylvania.

Dorothy was a dedicated homemaker, raising twelve children, and also worked for Johnson Rubber in Middlefield for 8 years until 1975. She was a member of Bristolville United Methodist Church and the Greene Church of the Nazarene. She had been a life member of the VFW Post 7200 Ladies Auxiliary in West Farmington, the West Farmington SCOPE and the Cortland Moose Lodge Ladies Auxillary in Mecca.

The family wishes to thank her previous caregivers and the staff of Windsor House of Champion for the compassionate and loving care shown to Dorothy. Dorothy’s favorite color was red, therefore the family encourages those attending calling hours and the funeral to wear red.

The funeral service will be held at 11 a.m. Saturday, January 11, 2020 at Greene Church of the Nazarene with the Pastors Jim Elkin and Shirley Frantz officiating. The family will receive friends from 6 to 8 p.m. Friday at Lane Family Funeral Homes, Shafer-Winans Chapel in Cortland and for an hour prior to the service at the church on Saturday. Burial will be at West Mecca Township Cemetery.

In lieu of flowers, memorial contributions may be made to either the Greene Church of the Nazarene or the Bristolville United Methodist Church.