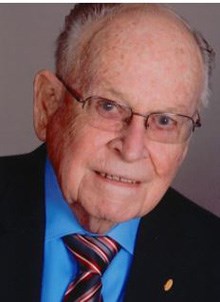 Edison, known by his family and friends as "Ed," was born April 25, 1924 in Pandora, OH, the  son of  the late Orrie and Lydia (Badertscher) Lugibihl.

He graduated from Pandora High School in 1942. Edison served in the U.S. Army during World War II.

Following the war, Edison received his Bachelor's degree in Education from Bluffton College.  He moved to Boardman in 1950 and continued his education, receiving his Master's degree in education and Principal certificate at Kent State University.

He attended Boardman United Methodist Church and was active there for 60 plus years, participating in many activities of the church.

Edison was a recipient of the Rotary International Paul Harris Fellow award, a Boardman School Hall of Fame inductee, and served as the treasurer of the two-year effort to build a new auditorium at Boardman High School under the banner of Auditorium 2000.  He is a 40-year member of the Phi Delta Kappa educational fraternity.  In 1957, he helped to organize the Boardman Local Schools Employees Credit Union, serving as the treasurer, while his wife served. as manager.  In 1992, the credit union merged with the Associated School Employees Credit Union where he remained on the Board of Directors until his death.  He was an assistant coach under Head Coach Jerry Thorpe for the 1960 Boardman High School football team that  posted an unbeaten  9-0 record.  He retired June of 1991 as principal of Boardman Center Middle School, a position held from 1969 -1991. He and his wife, Katherine, received the Boardman Civic Association's Lifetime Achievement Award from the Boardman Civic Association for their service to Boardman Township and its public school system.  He was an avid gardener and had a perpetual "green thumb."

Besides his parents, Orrie and Lydia, Edison was preceded in death by his in-laws, Joseph and Hazel Chuck; and brothers-in-law, Jay Chuck, Laverne Augsburger, and Eddie Keifer.

Family and friends may call on Thursday, May 6, 2021, from 3:00 to 5:45 p.m. at Davis-Becker Funeral Home, 8536 Market Street in Boardman.  A funeral service will follow at 6:00 p.m. at the funeral home with Reverend Jerry Krueger officiating.  Due to COVID-19, the 6-foot rule will be honored, and we ask that all guests, whose health allows, wear a mask.