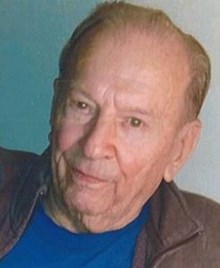 Born on September 9, 1930 in Youngstown, the son of John and Katherine Hrosar Butcher.

He worked at Youngstown Sheet and Tube for 33 years as a boiler engineer until closing in 1983. He served in the U.S. Army and obtained the rank of Corporal. He was a member of St. Paul the Apostle Church in New Middletown. He absolutely loved the game of football, was a devout Patriots fan and loved Tom Brady. He became a Tampa Bay Buccaneer fan (imagine that-we were so happy he got to see his Tom Brady win another Super Bowl). He loved to play pool in the evenings with his friends, scratch-offs, watch the history channel, and did the daily Vindicator crossword puzzle.

A Mass will be held in his memory at a later date. He was laid to rest at St. John the Baptist Cemetery.

The family would like to thank Windsor Estates personnel and residents for their outstanding care and friendships. Also, thanks to Dr, Michael Malmer and staff for their excellent care and kindness for many years. In lieu of gifts, take the time to do something kind or helpful for someone.

Arrangements were entrusted to the professional care of the Rossi Brothers and Lellio Funeral Home, 4442 South Avenue in Boardman.