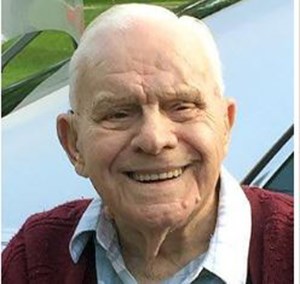 WILLIAMSFIELD - Edward J. Ostavitz, Sr., 95, formerly of Youngstown, was called home to our Lord Sunday evening, March 8, 2020, passing away peacefully at his home.

Edward was born April 25, 1924, in Youngstown, a son of the late Alexander and Mary Sawron Ostavitz, and lived in Youngstown for 67 years before moving to Williamsfield.

Mr. Ostavitz was a proud U.S. Army veteran of World War II, serving in the 3rd Army under General Patton.

Ed retired after a career at General Fireproofing. He was a member of St. Edward Church in Youngstown and of Our Lady of Victory in Andover. Ed was also a fourth-degree member of the Knights of Columbus.

Ed was proud of his Polish heritage and took joy in the successes of his family. When a family member accomplished something good, Ed would famously say, “that’s because you’re an Ostavitz!”

He loved fishing, playing the lotto, mowing his lawn, and collecting coins and odd items. He would never be without a flashlight, or a pen or pocket knife. Ed would often enjoy sitting on his porch and smoking a cigar, “just watching the world go by.” While many people did not know Ed directly, his home near Pymatuning Lake was often used as a point of reference for directions as the “place with the Cowboys on the porch.”

Funeral services will begin at 9:45 a.m. on Saturday at the funeral home, and will continue with a Mass of Christian Burial to be celebrated at 10:30 a.m. at St. Edward Church in Youngstown.

Interment will follow the Mass and will be at Lake Park Cemetery in Youngstown, where Ed will be laid to rest next to his beloved Flora.

Ed’s family thanks Dr. Henry Debiec; the staff with Hospice of Western Reserve (especially Robert and Lori); the Ashtabula County Country Neighbor Program (especially Eli); and Ed’s neighbors, Walt and Joyce Emerson, and Mike Coe, for all of the kindness, care, and concern offered to Ed and his family during his time with them.