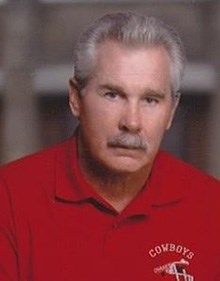 Boardman- Edward Paul Matey, 74, passed away at his residence on July 30, 2020. He was born on October 30, 1945 to Helen (Antolik) and Andrew Matey in Youngstown, Ohio. He lived on Youngtown’s West Side where he graduated from Chaney High School in 1963.

At Chaney, he was a three-year starter for Red Angelo’s football teams. Ed was a two-way starter and was granted All-City, All Northeastern Ohio and an All State performer in 1962. By the end of his senior year he was heavily recruited by several universities.

After his high school graduation, Ed went to Youngstown State University to play for the legendary Dwight “Dike” Beede. A four-year starter for the Penguins, he earned four letters while serving as co-captain his senior year. In the spring of 1968, he was named “Most Valuable Athlete” at YSU, capping off a brilliant athletic career with the top honor awarded by the school’s athletics department.

Upon graduation, he started his career teaching and coaching at his alma mater, Chaney High School. In 1971, Ed was hired to become the head football coach. Over the next 17 years, Ed became the winningest coach with 83 wins, 67 losses and 4 ties. During that time, the cowboys became the city series dynasty, as Ed led the cowboys to eight city championships, including the first undefeated 10-0 team in Chaney history.

When he stepped down as head football coach, he moved right into the front office where he served as the schools Director of Athletics for 12 years. He then became the schools’ assistant principal for his final four years at Chaney. In all, Ed spent over 34 years of service as a teacher, coach, and principal for Chaney High School until retiring in 2002.

Ed never missed a day of talking to Heidi and checking in with Madison to hear about her school and cheerleading. His relationship with Terri was none other than a father-daughter relationship and spent many hours with Kate fishing and hunting, teaching her how to use a riding lawnmower and building special projects together in the garage. Ed would light up with joy every time Jake would call to say, “Hi Papa, I love you!” and looked so forward to the day he could teach him the fundamentals of football.


In addition to being a loving husband and grandpa, Ed loved to hunt, make pierogis with his friends at Holy Trinity church every Thursday, was a talented carpenter and a master at being able to fix anything. He took great pride in his meticulous garage filled with nuts, bolts and tools for any project while directing his “helpers” along the way. Most recently he re-modeled his nephew’s home as a hobby during retirement. He had such special knack for turning any vision into reality with his carpentry skills.

Ed had an impact on so many. His legendary football and childhood stories, history lessons, dry humor and witty jokes will leave a void in the hearts of his closest friends but will be carried on by all who loved him.

He was preceded in death by his parents and brothers Andy and Bobby. Ed is survived by his sister Nancy Levander, sisters-in-law, Paulette Thorne, Jackie Defrank, Betsy Kimmel and Michele Alexander, brother-in-law, Dale Kimmel, nephew, Richie (Laurie) Levander and many other nieces and nephews.

Friends and family may call from 5 to 8 p.m. on Friday, August 7, 2020 at the Rossi Brothers and Lellio Funeral Home, 4442 South Ave. in Boardman. A celebration of life will be held at a later time.

Due to COVID-19, safety precautions will be taken. The 6-foot rule will be honored, and we kindly ask that all guests whose health allows, please wear a mask. For the health and safety of everyone, we ask that visitors do not linger at the funeral home after seeing the family.