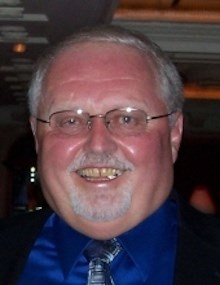 Elmer was born Jan. 8, 1947 in Youngstown, the son of Helen (Barney) Faciana and the late Elmer A. Barney.

He was a 1965 graduate of North Jackson High School.

He was drafted at 18 years of age and served in the Army (Big Red One) as a Vietnam War combat veteran where he served one tour from 1965-67.

Elmer is a lifetime member of the Mineral Ridge VFW Post 4192.

In 1998 after 31 years of service, Elmer retired from the Lordstown General Motors Plant where he was a tow motor driver and a member of the UAW Local 1112.

Elmer loved to fish with his buddies on Lake Erie, hunt, garden and mow his grass. He enjoyed watching NASCAR races, the Cleveland Browns, Clebveland Cavaliers, Cleveland Indians and the Ohio State Buckeyes.

Later in life, he enjoyed sitting on his swing talking to the neighbors and his friends.

Elmer is survived by his wife of 50 years, the former Gloria Branch, whom he married on June 6, 1970. He also is survived by his son, Michael Barney of Mineral Ridge; twin sister Agnes Spencer of Copley; sister Barbara Woolley of Canfield; sister Linda Joseph of Warren; sister Debra (Gene) Sexton of Blairsville, Ga.; and his brother, Frank (Elaine) Barney of Berlin Center.

Private services will be held for Elmer and he will be laid to rest at Kerr Cemetery with military honors. Lane Family Funeral Homes is handling arrangements.

The family would like to thank Dr. Richard Catterlin and staff, Dr. Ashlee Russo, and the St. Elizabeth Boardman Hospital ICU nurses (Barb, Brittany, Colleen, Janice, Jenna, Laurie and Kelly) for their care, kindness and compassion.

To send flowers to the family of Elmer Cecil Barney, visit our Tribute Store.

1
Here's who will get the COVID-19 vaccine first in Ohio
2
DeWine hints at new state restrictions as he reveals vaccine plan
3
Marlene L. D'Amato