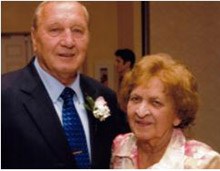 Frank was born on October 4, 1932 in Campbell Ohio, a son of the late John (Mingac) Mingo and Anna (Turchan) Mingo.

He graduated from Campbell Memorial High School in 1949 and later joined the military as part of the United States Naval Construction Battallions, better known as the SeaBees in the Phillipines.  He was honorably discharged from the military in 1960.  Frank was a life member of the Veterans of Foreign Wars and served as Post Commander of local VFW 7600 in Coitsville, Ohio.

Frank was an avid outdoorsman.  He enjoyed big and small game hunting and in his earlier years fishing.  His joy was his cabin in Pennsylvania.  There he loved cookouts with family and friends.  He enjoyed snowmobiling, 4-wheeling, and planting a yearly field of potatoes.   He was a life-long member of St. Nicholas Byzantine Catholic Church in Youngstown Ohio.

Frank was preceded in death by his wife of 65 years Jane (Freisen) Mingo. They were married October 8, 1955.

Other than his parents and his wife, he was preceded in death by his brothers Michael, Alexander (Phil), John, Robert, and sisters Anna Kolesar and Margaret (Margie) Cikovich.

The family has entrusted Frank’s care to the Wasko Funeral Home.  Church services will be held on Saturday, May 8, 2021 at 11:00 a.m. at St. Nicholas Byzantine Catholic Church, in Youngstown.  There will be a calling hour prior to the service, from 10-11:00 a.m. at the Church.

The family wishes to thank all the staff and care givers at Assumption Village for their outstanding compassionate and wonderful care that Frank and Jane received during their time spent there.  We also wish to thank Hospice of the Valley for their end of life care.