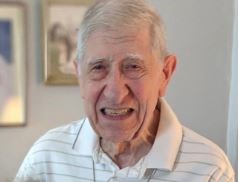 He was born May 9, 1927, in Warren, Ohio the son of the late Salvatore and Rose Marino.

He retired from Packard Electric in maintenance department after 30 years. He enjoyed watching football, bowling and was an avid Cleveland Indians and Browns fan.

Guy served our Country in the U.S. Army during WWII as a Pfc. With 8th Cavalry Regiment.

He is preceded in death by his parents, a brother Joseph Marino Sr., and two sisters Bessie Sidote and Grace Taranto.

Burial will be in All Souls Cemetery in Bazetta.