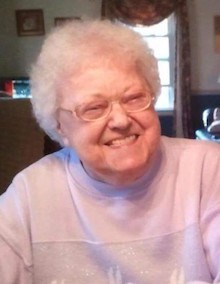 She was born May 31, 1921 in New Castle, a daughter to Adam Swiatkwich and Julia Gajda Swiatkwich.

Helen was a graduate of the class of 1939 from NE-CA High School in New Castle.

Prior to her family moving to Warren in 1947, she worked in a pottery factory in the New Castle area.

After the move, she worked at Packard Electric until her marriage in 1952.

She became a stay-at-home mom until her children required less attention. Later, she worked at the Imperial and Gillette Nursing Homes as a dietary aide.

She enjoyed collecting dolls, quilting and making crafts. She enjoyed volunteering at the Community Center teaching those crafts.

In addition to her parents and husband, she was proceeded in death by brothers Mike, Ted and Chuck; sisters Mary, Jennie and Wanda (Sandy); a son, Thomas; and a granddaughter, Samantha.

Her family offers thanks to the nurses and staff at Gillette Nursing Home for the care and compassion they provided these last several months as well as the staff and volunteers of Harbor Light Hospice.

To send flowers to the family or plant a tree in memory of Helen S. Webb, visit our floral store.