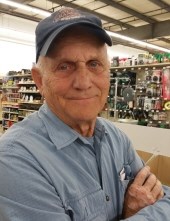 VIENNA- Jack D. Horner, 82 passed away surrounded by his family on October 29, 2019 at St. Elizabeth Hospital in Youngstown.

Jack was born on May 3, 1937 in Reynoldsville, Pennsylvania, the son of Robert B. and Jessie Elizabeth Pauline (Geer) Horner.

Jack was Baptized on, March 29, 1959, at the Bollinger Methodist Church, Bollinger, PA.

Jack was a graduate of Reynoldsville High School. He was employed by Grinnell Corporation for 28 years then continuing his career in maintenance for the Mathews Local School System. He attended the Vienna Presbyterian Church where he also proudly served as the sexton for 15 years.

Jack enjoyed gardening, working in his yard and spending time with his children and grandchildren whenever he could. He was also an avid fan of the Pittsburgh Steelers and Pirates.

He was preceded in death by his parents, Robert B. Horner and Jessie, his wife Bonnie Alice Lucille, daughter Cindy L. Horner Mohney, his sister Patty and brothers Gene, Merle, Roy and Alden.