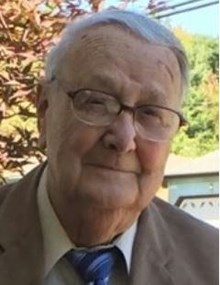 James was born March 1, 1927 in Youngstown, a son of the late Arthur and Helen Garside Booth.

A lifelong area resident, he attended Woodrow Wilson High School. From a young age, Jim worked in his parents' grocery store, Booth's Market on South Avenue. In 1945, he enlisted in the United States Navy, serving the majority of his duties aboard the USS California during World War II. After being honorably discharged in 1946 with the rank of Seaman First Class, Jim returned to his hometown and began working for his parents' business again.

In 1955, he ventured into operating his own business and opened a Dairy Queen on Canfield Road, running the business until 1960. After its closing, he took a position with Sparkle Market as the manager of the Meat Department, retiring in 1989.

A man of great faith, Jim was a longtime member of the former St. Andrew's Episcopal Church in Austintown and most recently a member of St. James Episcopal Church in Boardman. At St. Andrew's, he served as senior warden, an Eucharistic minister, sang in its choir, and was a member of its Men's Ministries. He enjoyed working alongside his fellow church members and friends at the church breakfasts and ribeye sandwich booth at the Shaker Woods Festival. More than anything, he loved the time spent with his family, creating many lasting memories over the years.

In addition to his parents, Jim was preceded in death by his brother, Jack Booth.

There will be no calling hours or services at this time. Arrangements are being handled by the Davis-Becker Funeral Home. Please visit www.beckerobits.com to share memories and online condolences with the family.