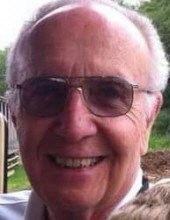 He was born June 6, 1935 in Coitsville, a son of Harold and Ruth (Morrison) Ifft. A 1953 graduate of North High School, he went to work that same year at Republic Steel Corp. in Youngstown. In 1958 he was drafted into the U.S. Army and served at Ft. McClellan, AL for 2 years. He was recalled into the service during the Berlin Crisis in 1961. Upon retiring from Republic Steel in 1984 after 31 years he embarked on his next career as a body shop manager at Stackhouse Olds, Sweeney Chevrolet and King Collision, retiring in 2013. Jim grew up in the Coitsville Presbyterian Church. He was a great dependable friend to many. He was a wonderful father and grandfather, attending many many sporting and musical events for them.

Jim was proud to have traveled with the Warren Junior Military Band throughout Europe in 1985. Jim is survived by his wife of 37 years, the former Kathy D. Caraway Murphy, whom he married March 19, 1983; his sons, Tony (Peggy) Ifft of Geneva and James (Maggie) Ifft of Hebron, KY; his daughters, Kimberly (Bob) Smalley of Boardman, Melissa (Brian) Lyons of Hubbard and Heather Murphy of Cullman, AL; his brother, Harold (Mary) Ifft of Holiday, FL; his grandchildren, Ronnie and Abby Ifft, Michael and Brian Yatsco, Shaun and David Snyder, Matthew Smalley and Dr. Nick and Danielle Bucci and his great grandchild, Skyler Ifft. Besides his parents, Jim was preceded in death by his brothers-in-law, Wray and Robert Caraway and James Ewing and his sisters-in-law, Carol Ewing and Kay Platt.

Friends may call from 4-7 p.m. Thursday at the Lane Family Funeral Homes-Anstrom Chapel, 8387 Tod Ave. in Boardman and 10-11 a.m. on Friday, prior to the Funeral Service at 11 a.m. at the funeral home. Pastor George Lee of First Covenant Church will be officiating. In lieu of flowers, memorial donations in Jim’s name may be given to First Covenant Church, 5210 Glenwood Ave. Yo., OH 44512.