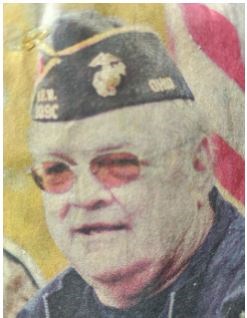 Jerome “Jerry” Kopiak, 69, of Warren, entered peacefully into eternal life on Sunday, February 9, 2020 at 9:35 a.m. in his home surrounded by his loving family under the comforting care of hospice.

He was born Tuesday, March 28, 1950 in Kingston, Pennsylvania the son of the late Andrew and Helen Stochla Kopiak.

A veteran of the United States Marine Corps, Jerry served his country honorably and faithfully during the Vietnam War.  For his service to his country he was awarded the Vietnam Defense Service Medal, Vietnam Service Meal with 1 Star, and the Vietnamese Campaign Medal and was honorably discharged on March 24, 1970 with the rank of Lieutenant Colonel.

Jerry was a talented truck driver working for Ohio Fast Freight, Kmart Distribution Center and retired from Schneider Trucking after 30 total years as a truck driver.

Jerry was a proud Marine and was a wonderful Papa and best friend to his three grandbabies, spending time with them and supporting them in all that they did.

He is survived by his wife the former Mary J. Cenname whom he married on August 7, 1976; two daughters Vanessa Phalen of Trenton, NJ and Violet (Matthew Davis) Kopiak of Warren; a brother Andrew (Marie) Kopiak Sr. of Richmond, VA and three grandchildren Gianna, Matteo and Megan.

Besides his parents, Jerry was preceded in death by a daughter Valerie (Baby Smurf) Kopiak and brothers Norman and Tommy Kopiak.

A Mass of Christian Burial with Fr. Frantisek Katrinak, officiating will be offered at 11:00 a.m. Thursday in the church.