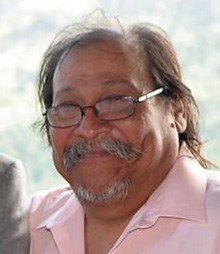 Jose H. Berg, 66, of Lordstown, passed away at 9:02 AM, Thursday April 29, 2021 at Mercy Health St. Joseph’s Warren Hospital.
He was born February 20, 1955 in South Bend Indiana, the son of Raúl and Julia (Carrizales) Garcia.  He was raised by his adoptive parents Henry and Helen Berg.

Jose was a graduate of LaSalle High School in South Bend Indiana. He became a career truck driver shortly after, retiring in 2018. He was an avid Pittsburgh Steelers and NASCAR fan, former stock car driver and a United States Marine Corps Veteran of The Vietnam War.

A Celebration of Life will be held Saturday May 15th, 2-6 PM at Ross’ Eatery and Pub, 8421 Todd Ave SW, Warren Ohio, 44481.
Arrangements are being handled by The Joseph Rossi and Sons Funeral Home in Niles.