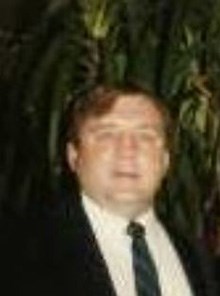 He was a 1960 graduate of Newton Falls High School where he was an outstanding athlete with the football team.   He would carry his enthusiasm for the game while playing for the Youngstown University football team.  With his induction into the United States Army, Kenny would leave the university and enter the service on December 13, 1961.  He was honorably discharged on December 12, 1963.

Returning to civilian life, Kenny would begin his career as a business owner, starting as a partner in Carlos’s Nightclub in Newton Falls.  He would expand his ownerships to include the Convenient Food Marts in Newton Falls and Warren.

It was on July 19, 1974 that Kenny would marry Linda Bryant.  They would share many loving years together until her passing on November 9, 2004.

He enjoyed memberships in many organizations which included the American Legion Post 331 in Ravenna, a life member of the DAV, AMVETS Post 112, Army Navy Garrison and the VFW Post 3332.

Kenny was a parishioner of St. Michael Catholic Church of the Byzantine Rite in Newton Falls.

A life-long resident of Newton Falls, his name was synonymous with Newton Falls.  He was charitable to the community that he cared so deeply for.   He would extend his charity to many national organizations which there are too many to name.  Kenny was a big man with an even bigger heart.

Kenny enjoyed cooking and to expand his knowledge, he would watch cooking shows and read his many cookbooks.  He loved the game of golf.  Over the years, Kenny has traveled to many states to enjoy the courses.  Locally, he and his friends would play a weekly round near a pre-determined location.  The location was determined by which food was selected by the group to be enjoyed after the final round.   Any of Kenny’s friends, would also remember his friendly ear tweak.

As his health declined, Kenny knew that his close friend, Kenny Layshock was there to help him whenever needed.  Also helping were his friends, Mary Ann Metz, Don Young and neighbor, Rosemarie Scrabis.

Preceding Kenny were his wife, Linda; his parents; his sister, Caroline Jones and his brother, Ronald.

A thank you is extended to the caring staff of Washington Square Healthcare Center in Warren and Veterans Administration Medical Center at Wade Park in Cleveland.

A Funeral Liturgy will be held on Thursday, January 14, 2021 at 10:00 a.m. in St. Peter and St. Paul Byzantine Catholic Church in Warren, Ohio with Rev. Simeon B. Sibenik as celebrant.

Military Honors will be held by the United State Army and the Newton Falls Veterans Honor Guard at St. Michael’s Cemetery Chapel in Newton Township.  Following the military service, Kenny will be laid to rest next to his wife.