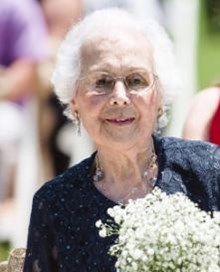 Maria Francesca Ricciardi, lovingly known as "Ciccina" to many, 96, of Newton Falls passed away peacefully at Antonine Village on June 25, 2021. She was born March 10, 1925 in Lipari, Italy, and raised her young family on the island of Vulcano, Sicily. She and her husband Giuseppe came to the United States with their family on the Andrea Doria in 1955 to give them all a better life. She spent her entire life in Newton Falls caring for her family, grandkids and great grandkids, most of whom came to know her as “Nonna."

She was a devoted homemaker to her family, as well as a talented seamstress. She loved tending to her plants and vegetable garden, feeding herself and many others with the fresh produce her large garden cultivated. In the Italian culture, it is often said that food is love. All who came through Nonna’s doors felt her love through her amazing home cooked soups, pastas, meats, cookies, and desserts.

She was preceded in death by her husband, Giuseppe; parents, Antonio & Angela Iacono, and her brother, Domenico. She is survived by her children, Sam (Carol) Ricciardi, Tone (Cassie) Ricciardi and Enza (Jeff) Forstyk; her seven grandchildren, Charles (Charity), Anthony (Jenn), Louis, Anna Marie (Sean), Giuseppe (Haily), Carmen, and Marisa; her nine great grandchildren, Mariah, Dominic, Camden, Mason, Giovanni, Lorenzo, Angelo, Dean, and Vincent. She will be missed by many other extended family members who held her close to their hearts.

A Mass of Christian Burial is set for 11:00 a.m. on Monday, July 5, 2021 at St. Joseph & St. Mary Church in Newton Falls with Rev. David Merzweiler as celebrant. Visitation will be held at the church one hour prior to the service.

Maria will be laid to rest next to her husband in St. Joseph Cemetery in Paris Township.