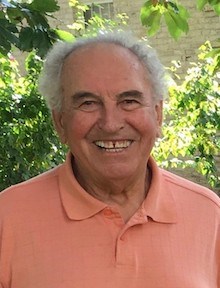 YOUNGSTOWN — Mario DiIullo, 84, passed away on April 8 at his home in the company of family.

Mario and his younger brother Nino immigrated to the United States in the spring of 1954 to join their family in the Smoky Hollow neighborhood of Youngstown. Upon arriving, Mario went to work as a bricklayer to help support his family.

He worked for the A. P. O’Horo Company and later Hively Construction.

As a result of his hard work ethic and pride in his work, he became a master mason whose work was always in high demand. Upon retiring, he specialized in building brick mailboxes for family and friends.

Mario was a member of Our Lady of Mount Carmel Church in Youngstown.

He was very proud of his Italian heritage and was involved in numerous Italian clubs and activities. His love of his heritage also included making homemade wine and Italian sausage, which he generously shared with others; and playing morra with his friends at The Georgetown and bocce on Tuesday mornings at St Anthony’s.

He especially enjoyed playing bocce with his wife Pasqualina (Pauline) in the mixed league at the MVR.

Mario and Pauline were also avid travelers and enjoyed traveling the world with family and friends. The couple was very involved in raising their grandsons and rarely missed their various sporting events or school activities.

Mario was preceded in death by his brother Amico and sister-in-law Sophie.

Due to the restrictions created by the coronavirus, Mario will be laid to rest at a private family ceremony at Lake Park Cemetery with the Very Rev. Msgr. Michael J. Cariglio as officiant.

Arrangements have been entrusted to the professional care of the Rossi & Santucci Funeral Home, 4221 Market St., Boardman.

Family and friends may visit www.rossisantuccifh.com to sign the guest book and send condolences to Mario’s family.