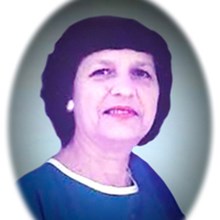 Born in Greenville on July 30, 1931, she was a daughter of the late Guy "Tony" and Emma (Morse) Eagan. She was a 1949 graduate of the former Penn High School, Greenville.

Patricia was an extremely hard worker and began her career early in her life to support her family. She worked as a secretary at Thiel College, Greenville and was employed by Sears department store, in the Shenango Valley Mall for more than 25 years.

Patricia was a member of the Church of Notre Dame, Hermitage.

She was an avid Cleveland Browns fan and later in life she loved to dance.

In addition to her parents, Patricia was preceded in death by her husband, Roy O. Wallace; and two daughters, Linda Salamans and Susan Darr.

The family suggests memorial contributions be directed to the Alzheimer's Association, at www.ALZ.org

Due to health concerns, there are no services. Online condolences may be sent to the family at www.McGonigleFuneralHomeandCrematory.com