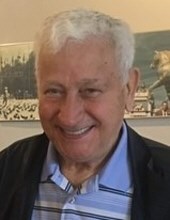 Ralph was born November 6, 1929 in Potenza, Italy the son of Rocco and Mary Villano and came to this country and the area as a young man. Ralph was the past president of Youngstown Wholesale Grocery Company, a family run business in Youngstown and Austintown for over 100 years. He was active in the day to day operations for over 60 years.

His moto at the office was: “the employees work with me, not for me. “Ralph emigrated from Potenza, Italy to the US at 21 years old and settled in New York where he worked part time in a grocery store. Later he worked in sales for the Prince Macaroni company while in New York. Ralph them moved to Youngstown, Ohio to work at his uncle Sam’s company, which later became Youngstown Wholesale Grocery Company. Ralph married his first wife, the former Helen D’Altorio in 1958. Helen passed away in 1993. He leaves his second wife the former Donna Rossi whom he married July 7, 2001.

Friends my call from 3 to 6 PM Thursday February 13th at the Lane Funeral Home Austintown Chapel and again from 9 to 9:45 AM Friday at Our Lady of Mount Carmel Basilica where a Mass of Christian Burial will begin at 10 AM.