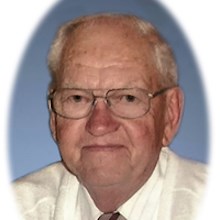 A veteran of the U.S. Army, he was stationed in Korea following WWII and was honorably discharged as a sergeant in 1947.

For 47 years, Dick was a cornerstone of the Union Area School District where he taught Health, History and Drivers Education.

While at Union, he began his coaching career in basketball and was later appointed head baseball coach, leading the Varsity Scotties for 21 years.

As an educator and coach, Dick served as a role model and mentor to many young students and athletes. In recognition of the his profound impact on students, athletes, and his years of dedicated service, the Union Area School District named the High School Auxiliary Gymnasium “The Dick Hart Gym."

In 2009, he was inducted into the Lawrence County Sports Hall of Honor.

Dick was a longtime member of Trinity Episcopal Church, New Castle, where he served faithfully as head usher for many years.

Dick cared deeply for his children, grandchildren and great-grandchildren. He never missed an opportunity to spend time with his loving family.

In addition to his parents, Dick was preceded in death by his sister, Joan (Hart) Wolfe.

The family would like to extend their sincere gratitude to all the aides, nurses, VA and Anova Hospice who provided help, support and assistance with Dick’s care. An extra special measure of gratitude goes to Dorothy Feezle, who spent the past seven years providing incredible compassion, love and care for Dick. We are proud to have Dorothy as a member of our family.

A memorial service is being planned for June 18 at Trinity Episcopal Church, New Castle, with more details to be announced nearer the service date.

Entombment will be at Castleview Memorial Gardens, Neshannock Township.