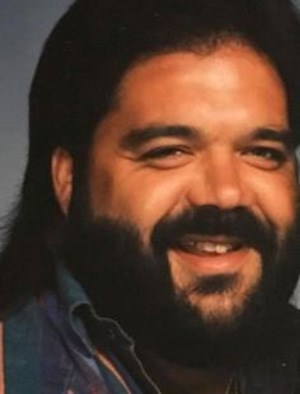 Robert A Jones, 58, of Braceville Township, went on his last earthly ride on his shimmering, cherry red Harley in the early morning of Sunday February 23, 2020. After the most courageous battle with Pancreatic Cancer, he arrived at his new destination, being welcomed into the golden gates of Heaven. Bob was a true fighter, warrior and hero to all throughout his Cancer journey, which he never once fought alone. He continually displayed grace, positivity, strength, and most of all a sense of humor every single day.

On Thanksgiving morning, November 23, 1961, Bob came into this world to his loving parents, David and Peggy (Walker) Jones. He was a lifelong resident of Braceville Township and attended LaBrae Local Schools. Bob was the youngest of four children, two boys and two girls. Growing up, he recalled many stories playing outside with his siblings and neighborhood kids, taking family vacations to Canada, and proudly playing football with his friends for the Vikings. He was notorious for throwing parties each time his parents left town and begged his sisters not to tell as all the neighborhood friends came down.

Bob worked for Denman Rubber, Co-owner of SunSpot Tanning and Nails with his former wife, Tina Jones, he was the best breakfast cook at Uncle Mules Restaurant, worked for MCI Communications, Taylor Winfield, and retired from Kraftmaid Cabinetry just shy of his 20 year anniversary. Through each of his places of employment, Bob made many lifelong friends. He was a hard worker and always willing to lend a helping hand.

Besides his formal jobs, Bob was an avid craftsman and woodworker. He enjoyed creating beautiful pieces of oak, cherry, and walnut furniture and benches. He built corn hole boards made to order, both hand painted or decked out with lights to play at night. He created lamps out of favorite wine bottles and loved to wood burn custom creations as well. Bob always had a remarkable talent for art, drawing and creating.

Bob’s biggest passions in life were spending time with his kids and family and riding his Harley. When he was not woodworking, Bob would likely be found getting some “wind therapy” on the backroads, with his daughter as his shadow, right on the back of the Harley with him. Bob was so proud of his precious Harley and won many awards through bike shows and was even featured in Thunder Roads Magazine.

Bob always talked about his kids and they were his greatest accomplishment in life. He talked of them with such praise and was the proudest Dad. Bob loved attending and coaching the baseball games of his son, AJ, from little league all through high school.

He enjoyed attending his daughter’s softball games and watching Carly cheer from age 5 to under the lights every Friday night in high school. Bob loved riding ATV’s with his family, making homemade donuts over the backyard fire, and going snow tubing in the winter. He often went to the Indians, Browns, Cavs, and Youngstown Phantoms games. Bob also loved country concerts with his daughter every summer, specifically their favorite, Rascal Flatts. He loved any time that he got to spend with his friends and family and made the most of this precious life he had.

Bob was a member of the Sons of AMVETS at AMVETS Post 112 in Newton Falls. He enjoyed spending time at the club laughing with friends, having some drinks and attending their functions as a member of the Browns Backers Club.

Bob will forever be remembered as the best smelling man in town, having the most contagious laugh, being the brightest spirit in the room, and someone you could always count on. Bob is survived by his mother, Peggy Jones, of Braceville, his daughter, “his rock,” Carly Jones, of Howland, his son, Allen “AJ” Jones (Alison Holderman), of Champion, his former wife, mother of his children, and friend, Tina (Mulvey) Jones (Phil O’Hara), of Howland, two sisters, Linda Jones, of Salem, Sue (Terry) Warner, of Leavittsburg, two beloved nephews, Brian (Jocelynne) Warner, of Southington, Eric (Brittany) Warner of Leavittsburg, a nephew Tim (Candice) Jones, of Salem, two great nieces, Maclayne and Katie, three great nephews Collin, Finnley, and Connor, his sidekick and garage kitty, Harley, many close cousins and hundreds of cherished friends. Bob was preceded in death by his father, Dave Jones, of Braceville, and his brother, Jim Jones, of Salem.

A Celebration of Bob’s Life will be held on March 14, 2020 from 1-4 pm at AMVETS Post 112 in Newton Falls. In lieu of flowers, the family asks for a donation in Bob’s name to be made to Southern Care Hospice, as they are so greatly appreciated for helping to honor Bob’s wishes and allow his family to take care of him at home. Donations can be mailed to Southern Care Hospice, 5401 Ashley Circle Ste E, Austintown, Ohio, 44515.

Bob will continue to ride that cherry red Harley in paradise, days on end, where the sun will forever shine upon his face, the wind be at his back and the biggest smile on his face. We on Earth will miss him until we meet again, until then- take it one day at a time.