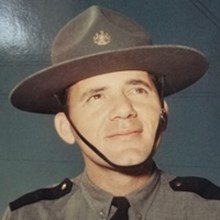 Robert E. Palladino, 89, of Butler, PA, formerly of New Castle, passed away surrounded by his family Friday, November 13, 2020, at his residence.

In 1991, he retired from the Pennsylvania State Police as Captain of Troop D in Butler, PA, following 35 years of service. Bob remained a dedicated advocate of the PSP throughout his life.

An avid reader and bridge player, Bob was a true friend to the many lives he touched throughout the course of his life, and loved socializing with friends and family.

Bob was preceded in death by his parents.

In keeping with his wishes, all services will be held privately.