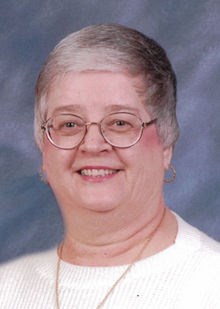 Mrs. Drake was born on July 9, 1940 in Crestline, daughter of Paul and Elizabeth Huffman Snyder.

She was a secretary for eight years at for Geauga Plastics Company in Crestline before moving to East Palestine in 1968.

She was a member of the former Grace Lutheran Church in East Palestine.

Bobbie was a homemaker and childcare provider for several children in East Palestine and Columbiana including Katherine, Elizabeth, Jared and Mark VanArsdale who were like family to her.

She made and sold crafts under the name of “Bobbies Hobbies” for 25 years, retiring in 2004.

While she was in Crestline, she was Worthy Advisor (1956) for Rainbow for Girls Crestline Assembly #66 and received the Grand Cross of Color in 1957.

A member and Past Matron of East Palestine Chapter #381 Order of the Eastern Star, she received the Eastern Star of the year award in 2000 and was Grand Page to the Deputy Grand Matron in 2002.

Bobbie was a board member and secretary for the East Palestine Rainbow for Girls #77 for several years.

Roberta is survived by a daughter, Joanne Heimlich Bosh of Galion; a nephew, Richard R. Snyder of Delaware; a niece, Ottine Miller of Tarboro, N.C. whom she helped raise; grandchildren Jeffrey LaRue, Jonathon LaRue and Jamie LaRue; and two great-grandsons.

She also was preceded in death by her son, Kenmore Drake; a sister, Mildred Bohmrich; and a brother, Bradford Snyder.

The family will receive friends Saturday (April 10) from noon to 1:30 p.m. at the Van Dyke-Swaney-Rettig Funeral Home, East Palestine where face masks are required and social distancing protocols will be followed.

Memorial donations may be made to Kenmore B. Drake Scholarship Fund at Youngstown State University, Office of University Development, One University Plaza, Youngstown Ohio 44555.