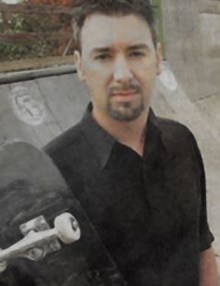 Sean Michael Scott, 48, passed away peacefully at his home on Thursday, February 18, 2021 after a two and half year private and valiant battle with cancer.  Sean was born January 10,1973 in Salem, OH to Walter and Linda (Difiore) Scott.  He worked as an Electrical Engineer in the Automation Division of Morgan Engineering for over 9 years, a job he was extremely dedicated and passionate about.  He had a fascination for all things electrical, down to his dream car that he was especially proud he was able to achieve. He was an avid skateboarder from a young age and continued to skate well into his 40s.  He was very proud of being involved with the development and installation of the Alliance Skate Park.  Both he and his wife were very passionate hockey and football fans.  He was a fierce Philadelphia Flyers fan and didn't miss watching a game.  He and his wife enjoyed traveling to games as much as possible.  He also loved the Philadelphia Eagles and was happy he got to see them finally win a Super Bowl.  He also enjoyed watching Ohio State Buckeyes football.  Traveling to beach vacations with his wife and friends was also a favorite pastime he enjoyed and looked forward to.

In addition to his parents, Sean is survived by his wife of 22 years, Melissa (Johnson) Scott; a sister Cindie (John) Difloure, and a daughter Nikayla Evans.  He was preceded in death by both his maternal and paternal grandparents.  Sean will be forever remembered by his numerous nieces, nephews, extended family, coworkers and his dear friends.

A gathering of family and friends will take place on March 13, 2021 at Gednetz-Ruzek-Brown funeral home in Sebring from 4 PM to 6 PM.  Friends and family may sign the guest register and send condolences online at www.grfuneralhome.com.  Arrangements have been entrusted to Brown Funeral Home, Sebring Chapel. (330) 938-2526.